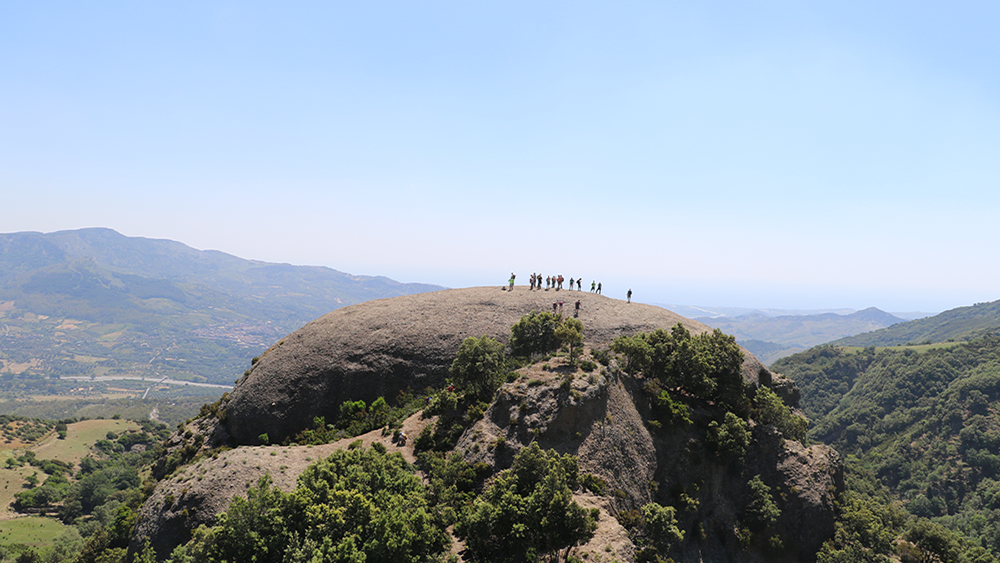 The main geological peculiartiy of Aspromonte Geopark, lies in the geodynamic and seismotectonic orgin and geomorphology and hydrographic evolution of this southern peninsular fragment of Orogene (Arco) Calabrian-Peloritano (OCP). OCP is, in fact, a stranger element along the Apennine chain, the resulto of a rare orogenetic process: it corresponds to a fragment of the alpine (partly ercinicà chain deteached from Spain, NorthWest Italy, Sardinia and Corsica area (caused by the opening of the Ligurian-Piedmontese Basin and the Tyrrehenian Sea, located east-southeast and thus overwhelmed entirely in the lower Miocene above the nascent Apennine Chain. A unique "geological system" emerges on the Mediterranean scale, ancient and yet still in formation, whose main components geological heritage - consist of crystalline-metamorphic paleozoic rocks; rivers and waterfalls; plateaux or sea terraces (and continental); unique geomorphological forms (Stones and Rocche), great landslides and the profound gravitational deformations of Versante.

The area proposed as Geopark concides with the perimetre of the Aspromonte National park with the overal surface area covering 65.645,46 hectares and comprises, in whole or in part, administrative territories of 37 municipalities falling within the territory of the geopark consists of 263.159 inhabitants (2016). Its territory is identified wit the Massif of Aspromonte, a sort of rocky acrocorus with corrugation, with its highest peak in Montalto (1956 m above the sea level) limited geographically to the east by the Ionian Sea, to the south by the Straits of Messina and to the west by the Tyrrehnian Sea. The northern border is located at the Limina Pass. The geological limit, however, is identified with the connecting line Palmi-Antonimia, important tectonic line which separates the Massive of Aspromonte from the Massif of the Serre, two crustal blocks with very different geoloical histories. The unique geographical collocation and morphologic features of Montalto give the possibility to enjoy an extraordinary 360 degree view of unique panoramas and sceneries embracing the Straits of Messina, Mount Etna, the Aeolian Islands, the Calabrian Greek territories, the territory of Locri as well as the Plain of Gioia Tauro.