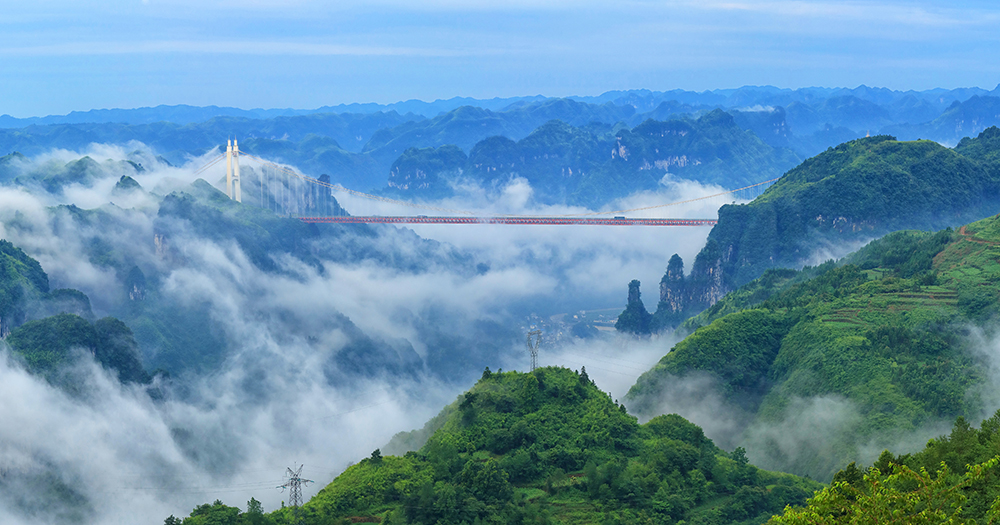 Geological features and geology of international significance Xiangxi Geopark, which lies in the southeastern fringe areas of Yangtze Platform in China and just next to South China Landmass , records the evolutionary history of the 820 million-year-old Yangtze Platform. It is a foreland basin that has been developed on the basis of the Middle and Upper Yangtze Craton, and has undergone multiple stages of tectonic evolution. Its tectonic evolution and pattern were subject to the control of the extensional cracking of the Pan-South China Paleo-continent, as well as the intra-continental collision and compression of the North China Plate, and the Cathaysian Plate. The strata in the Late Jurassic, Mesozoic era were also affected by the subduction of the Pacific Plate, forming a series of curved and deep, large
faults (e.g., the Fault Zone of Hubei-Hunan-Guizhou Lithosphere, Mayang-Lixian Deep Fault Zone), as well as strongly uplifted, folded mountain ranges (i.e., Sangzhi composite syncline, Wanyan-Siduping composite anticline). The geopark is home to 82 types of rocks, which are
dominated by sedimentary rocks. Among them, the outcrop areas of carbonate rock, clastic rock and metamorphic rock are about 2,528.28 km2 , 416.92 km2 and 34.8 km2 , accounting for 83.3%, 15.5% and 1.2% of the total geopark area, respectively. These rocks provide foundation for the landscapes of the geopark. The geopark is rich in geosites which feature various types and distinct characteristics. The geological relics with international significance in the geopark mainly include: Guzhangian Stage and Paibian Stage of GSSPs in the Cambrian system, the world’s largest red stone forests of carbonate rocks, and the spectacular, plateau incision-type karst platform-canyon landscapes. By combining some typical geological phenomena, such as paleogeological tectonic events, paleoglacial climatic events and paleontological relics, the geopark completely records the history of geological evolution of Yangtze Platform, as well as the incision and fragmentation of the fringe area of Yunnan-Guizhou Plateau. Therefore, the geopark has significant values in scientific research, science education and aesthetics, playing a crucial role in conducting global comparative studies.

Xiangxi Geopark is located at the hinterland of Wuling Mountains in Xiangxi Tujia and Miao Autonomous Prefecture, Hunan Province, China (N28°06′49.23′′— 29°17′24.26′′ , E109°20′13.66′′—110°04′12.55′′). Covering an area of 2,710 km2 , it is 398 km away from Changsha, the capital city of Hunan Province. The Geopark lies in the slope area, eastern fringe of Yunnan-Guizhou Plateau, southwest China, belonging to the eastern edge of the second step in China’s terrain. It features undulating terrain and intense incision. The main mountain ranges run from NNE to SSW or from NE to SW, which is consistent with the strike of the tectonic line. In general, its terrain gradually descends from northwest to southeast, with its altitude ranging from 150m to 1,437m, and with an average altitude of 643m. Topography is  obviously subject to the control of tectonics and lithology, and its geomorphic features vary with its tectonics and lithology.While karst platforms-gorges-stone forests, or landforms created as a result of corrosion, are mainly developed in the areas where 2 carbonate rocks occur, the landforms caused by erosion are mainly found in some areas where clastic rocks are distributed. The geopark is characterized by northern subtropical monsoon climate, and an obvious continental climate. In terms of water system, it belongs to the tributaries of  Yuanjiang, Yangtze River Basin: Youshui and Wushui river basin. Its flora belongs to Pan-Arctic kingdom and is rich in biodiversity. The area where Xiangxi Geopark is located has a total population of 296,000, among whom 81% are ethnic minority people. It is mainly inhabited by Tujia and Miao ethnic
minorities. The local residents are mainly engaged in agriculture, livestock raising and tourism service industries. It is surrounded by many natural and made-made landscapes, and known as one of the birthplaces of Wuling Culture.