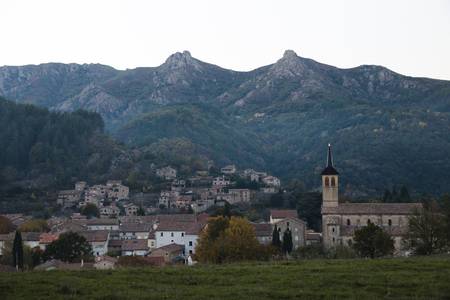 The Monts d’Ardèche UNESCO Global Geopark, primarily labeled as a Parc naturel regional in 2001, is located on the south-eastern fringe of Massif central. It covers more than 2200 km² of medium-high mountainous area. The altitude varies from ca 170 m in the South of the Park (at Les Vans), to the highest point of Mont Mezenc at 1752 m. It can be roughly divided in 3 distinct geographical entities: the plateau showing characteristic mountainous landscapes and climate, the (steep) slopes which are mostly covered by chestnut orchards, this production being the symbol of the Parc, and the lower Piedmont part, which shows more Mediterranean landscapes and climate, with vineyards or olive plantations. The area is drained by an extremely dense network of rivers and streams, due to rugged landscapes.

The Monts d’Ardèche UNESCO Global Geopark is a well-preserved territory with numerous and exceptional geological resources. The area is composed of various crystalline and volcanic successions, located in the middle of the massif, whereas sedimentary terrains are to be found on the eastern border only. All geological periods are represented, covering a span of 550 Million years, from the Paleozoic until present times, including the ancient basement, the Mesozoic sedimentary rocks, the Cenozoic and then Neogene volcanic rocks. A total of 51 geosites of particular importance have been identified in the frame of the labeling process. Among the emblematic sites and features of the Geopark, phonolitic Suc of Mont Gerbier de Jonc, or the Dinosaur’s footprints visible in Payzac, are maybe the most remarkable.

The area is very rural and has no big city, its population density reaching only ca. 30 inhabitants/km².

Education and public awareness activities in the field of geology are a core part of the missions of Parc naturel regional des Monts d’Ardèche and have has increased a lot, with various conferences, courses and exhibitions occurring all over the Park. Geosites are therefore often used as training material for field courses, which target a wide audience, from schoolchildren and students to foreign tourists. Sustainable activities using local and natural resources are vital for the area, and can be highlighted through emblematic products, i.e. chestnuts (much appreciated as fresh fruits or processes by the confectionary industry), wild blueberries, unique wines or labelled beef meat, all of them following traditional production processes. Together with tourism activities, this allows people to live and stay in Monts d’Ardèche UNESCO Global Geopark.