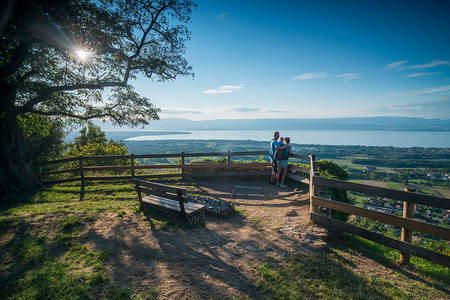 The Chablais UNESCO Global Geopark is unique, with a landscape that recounts an ancient geological history of over 250 million years. Along the 50km which separates Lac Léman (lack Geneva) and the Joux Plane Pass (Morzine - Avoriaz), the Chablais reveals the story of the formation of the Alps, but also the recent glacial events that have carved out the landscape. The riches of this geological history are visible, notably through a large number of lakes and a wealth of renowned mineral waters (Evian, Thonon). The quality of its geological record and the ease of its interpretation render the area of international significance for the understanding of the Alpine Orogeny and the development of tectonic thrust theories.

The mountainous limestone peaks of the Haut Chablais stand at around 2400m and contrast with the lower altitude rolling landscape of the Bas Chablais to the north.

Natural landscape seen in the Chablais UNESCO Global Geopark, has also strongly influenced the traditional architecture, the working of the land, the high mountain farms, or even the local stories and legends, which are all witness to the strong links between man and nature.

The Chablais UNESCO Global Geopark, sits in a 50km long, remarkable natural landscape, between Lac Leman and Mont Blanc, which has influenced the culture and life of both its inhabitants and numerous visitors. The population is concentrated in the principal agglomerations of Thonon-les-Bains and Evian-les-Bains and other lakeside towns. In 2009 the average population density was 144.9 habitants/km2, above the French national average. It has a diverse and strong economy with around 5000 businesses.

Close links have been developed with our substantial network of tourist stakeholders, museums, mountain guides, heritage guides and organizations such as the Portes du Soleil. Communicating through arts projects is also of central importance to the Geopark with recent initiatives in land art, theatre, music and photography. Actions such as the structured training of mountain guides and other tourist professionals have expanded our network to over 84 accredited guides in France and Switzerland.