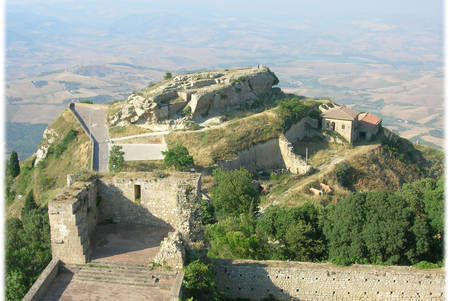 The UNESCO Global Geopark is characterized by its geological diversity. Geologically the area covers central part of Sicilian foredeep between the Appennine chain and the Iblean foreland. In its northern area the thrust belt within the southern branch of the Erei Mountains, was formed by the collision of the African and European tectonic plates. The northern area presents deposits with beautiful sandstone formations. This on-going tectonic impact will ultimately lead to the closure of the Mediterranean Sea. The area is significant for its gypsum and sulphur deposits which were laid down during the Messinian Salinity Crisis between 5.96/5.33 million years ago. Abandoned sulphur mines and the history of sulphur extraction can be seen in the Floristella-Grottacalda Mining Park, one of the most significant sites for industrial archaeology in southern Italy. This crisis occurred due to the desiccation of the Mediterranean Sea when the Straits of Gibraltar closed. The crisis ended with the return of the sea and the deposition of "shallow marine" deposits. Here emerged diffusely the most powerful and extended sequences of evaporitic rocks of Messinian age of the entire mediterranean basin.

The name Rocca di Cerere has been chosen because of the ancient consecration of this territory to the Kthonic goddes Ceres and it reflects the close relationship, established through time, between mythology, the Earth mother and man.

The sandstone peaks of the Geopark have been inhabited since the Paleolithic age. This landscape was an important prehistoric extraction site. Here man began to differentiate the salt rocks of sodiumchloride from the potassic salts. Certainly from Minoan - Mycenaean ages, the inhabitants of this part of Sicily, exported sulphur tables to the rest of the Mediterranean Sea as recent archaeological researches in Monte Grande and Milena now demonstrate. The ensemble offers a landscape rich in suggestions. Two of the most important archaeological sites of the Mediterranean can be visited: The Roman Villa of Casale and the Polis of Morgantina. The area includes the Mining Park Floristella, 4 natural reserves, museums, castles and churches, manifestations such as the Holy Week or the Palio dei Normanni. There you can practice activities in nature (nautical sky, sailing, canoe, free climbing, MTB, birdwatching, etc.) and taste typical products. The main educational centre is located in Pergusa, other educational activities are located in Rossomanno, Calascibetta, Altesina, Train Museum and Nicoletti Lake.

The Rocca di Cerere UNESCO Global Geopark is represented by public and private entities working together in "districtual" form in order to promote the territory and its resources in new and innovative ways, by proposing the development of geotourism through the creation of "pathways" aimed at valorising and improving the fruition of the natural-geological, agro-alimentary, historic and culture heritage of the area in an integrated and sustainable way, including complementary services and facilities.