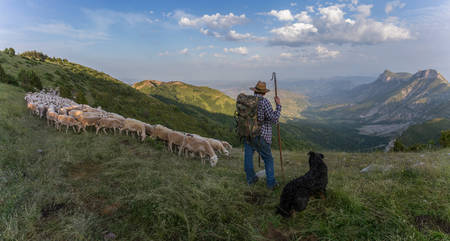 ORIGENS UNESCO Global Geopark is located in the northeast of Spain, in the province of Lleida in Catalonia, 200km from Barcelona. It is located in the central part of the Southern Pyrenees and along the ECORS-Pyrenees transect, which is the most representative and known cross-section of any part of the Pyrenean range and represents a landmark for modern geology worldwide in the understanding of mountain belts.

The territory of the UNESCO Global Geopark is characterized by a set of East-West oriented mountain ranges and basins, defined by gentle topography. This alignment corresponds to the vanus overthrust nappes related to the geological record of the past 550 million years containing fossils of vertebrates, invertebrates and plants that help us understanding the evolution of life in this area.

In the north, you can find the Axial Pyrenean zone with the oldest rocks of the mountain range. To the south, there are minor intermountain sedimentary basins developed when thrust sheets were formed (Tremp basin, Àger basin). Origens has a complete stratigraphic series of the Mesozoic. From this era, it must be highlighted the Upper Cretaceous rocks, where the remains of bones, tracks and eggs of the last dinosaurs in Europe are preserved. Moreover, it is worth mentioning the unique preservation of the late syn-orogenic sediments in relative internal parts of the system Middle Eocene-Oligocene conglomerates.

This area is internationally recognized as a natural laboratory for sedimentology, tectonics, external geodynamics, palaeontology, ore deposits and pedology. In addition, other natural and cultural heritage is also remarkable including astronomy and archaeological sites.

The economy of this rural area is mainly based on the service sector, although the primary sector is notably important as well. Despite the reducing number of farms, agriculture and livestock, farming activities still account for more than 10% of employment. Agriculture also includes the planting of vines linked to the Costers del Segre Designation of Origin and the recovery of ancient local breeds like Xisqueta sheep. Various initiatives related to sustainable rural development have been carried out in the area of the Geopark for over a decade like sustainable touristic products. Moreover, the UNESCO Global Geopark has based its education and dissemination strategy through a well-distributed network of 14 facilities that help unfolding the geological heritage to different levels of expertise.

The Origens UNESCO Global Geopark has become the unifying force for promoting these initiatives in order to raise their profile and optimize coordination between the public and private social agents, ensuring at all time the participation of the local community in the development of the initiatives.