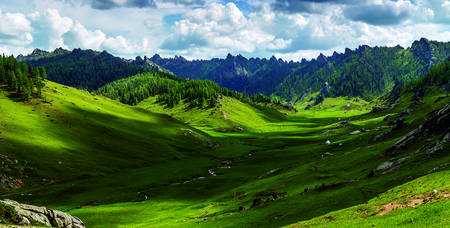 Located on the south slope of the Altay Mountains, Keketuohai UNESCO Global Geopark plays an important role in understanding the geological evolution of the area including the Altai orogenic belt and magma intrusion. In the UNESCO Global Geopark, you can admire the Altay granitic geomorphologic landscape, which is the reason why the area is referred to as China’s Yosemite. The world-renowned No. 3 granite pegmatite rare-metal ore deposit of Keketuohai are considered world class. These natural wonders are non-renewable geological resources formed and developed under various dynamic factors and special favorable conditions during the long geological history. They have significant scientific value for geomorphologic, seismologic and mineralogical research.

The Keketuohai UNESCO Global Geopark was the territory of Xiongnu in the Han Dynasty, the annexed territory of Western Turks in the Sui and Tang Dynasties, the feud of the kings of Mongolia in the Yuan Dynasty, the pasture land of Oriad in the Ming Dynasty and governed by the Grand Minister Consultant of Khovd in the Qing Dynasty. There are large quantities of Russia style architecture in Keketuohai Town, which has the reputation of being a famous historical and cultural town.

The local residents are mainly Kazak, who have a unique historic culture. There are 168 intangible cultural heritages in Fuyun, which vividly reflect the life of people in Fuyun and the national customs of the Kazak. There are also many cultural landscapes with a long history preserved in Fuyun, such as Kazak rock paintings, tombs, stone statues, Botamaoyin rock paintings, etc. The Botamaoyin rock paintings are at least 3000 years old. The intangible cultural heritages and cultural landscapes supplement each other and reflect the rich history of Fuyun and form a harmonious background for people of all nationalities to live in harmony.

The Kazak live a nomadic life since ancient times and undertake animal husbandry from generation to generation. They live where there is water and grass and are called the "Horseback People". At Keketuohai, special cultural and sports activities such as equestrianism, arkin playing and singing and hunting for sheep constitute part of the traditional culture.

The local famer population grows mainly wheat, corn, beans, etc. Major industries are mining, the electric power industry, etc. In recent years, with the construction and development of Keketuohai UNESCO Global Geopark, the local residents in the UNESCO Global Geopark also provide catering, accommodation and other visitor reception services for tourists, or sell native products of agriculture and animal husbandry to tourists. As a result, the household income increased significantly.

At present, there are fixed science popularization places in the UNESCO Global Geopark, such as a tourist center and a Geopark museum.