“Ancient world without borders - geoscientific and other natural values” 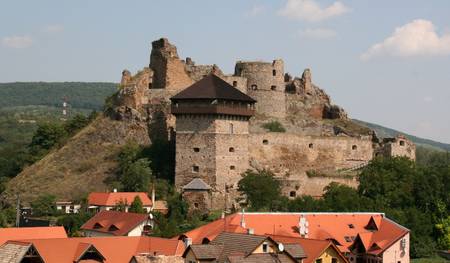 The geology of the Geopark includes diverse past volcanic events and a geological history dating back the last 30 million years from the birth of the Pannonian basin. Within a small area, the Geopark contains a wide spectrum of volcanic sites of spectacular sights, and several landscape protection are-as and other territories.

The area is also recognised as an important centre for the Palóc ethnic group’s folk art and living traditions. The rich cultural herit-age of the area has been recognized by UNESCO as a World Cultural Heritage site with Hollókő located within the confinement of the Geopark.

The members of the UNESCO Global Geopark and the local people have made great efforts to preserve and present the many sites of earth-scientific values, cultural heritage and the famous hospitality of the palóc peoples. In the Geopark - which is a result of a unique cross-border cooperation in Central-Europe, geotouristism is developing the local economy and the conservation of the geological and cultural values of the region.

The UNESCO Global Geopark delivers educational presentations for the general public, enhancing consciousness for the value and protection while also promoting cultural (intellectual, physical and built) heritage. Its emphasis is on the complementarity between natural and cultural landscape, and the harmonization between different projects, the development of new geosites and their interpretation. The UNESCO Global Geopark maintains existing geosites in good condition, promotes them and includes them in the touristic supply of the micro regions. It constructs and maintains interpretive infrastructure facilities at the geosites, new study trails, trails for hikers, bikers and horse riders. The UNESCO Global Geopark supports landscape revitalisation programmes, with special regard to wet habitats and contributes to the implementation of the national programme of the European Landscape Convention.