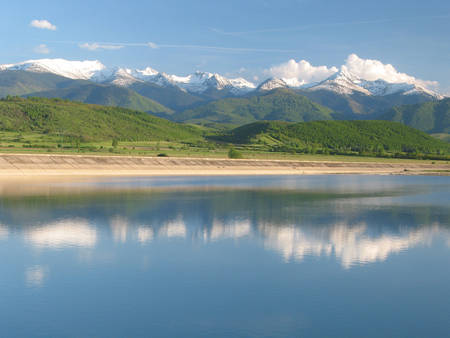 The Haţeg UNESCO Global Geopark is located in the central part of Romania, in Southern Transylvania near the main routes to Hungary, Serbia and Bulgaria. The relief has an amphitheater shape with a central piedmont plain, with terraces and meadows surrounded by the picturesque mountain chains of: Retezat, Sureamu, Tarcu, Poiana Rusca.

Its vegetation ranges from alpine shrubs and grasslands, spruce fir, beech forests to sessile oak forest some of them already turned into fields and grasslands. Animal fauna is very divers, comprising among other hundreds of species bears, wolfs, lynxs, deers, marmots, and birds.

The UNESCO Global Geopark area represents a tectonic basin developed as response to collision of tectonic plates at the end of the Cretaceous, followed by tectonic subsidence during the closure of the North Tethys Realm. Jurassic to Pleistocene sedimentary rocks cover the basement of Precambrian – Paleozoic metamorphic and magmatic rocks. Paleogeography reveals Haţeg area was part of an archipelago of islands during Late Cretaceous. Quaternary glacier features, old quarries and a closed copper mine exploitation are also part of the geological heritage.

The region is world famous for its dwarf dinosaurs, also known as the “dwarf dinosaurs of Transylvania”, from the end of Cretaceous, 65 million years ago. The Geopark celebrates this special heritage. More than ten dinosaur species, both herbivorous and carnivorous, have been found in fossil fluvial and lake deposits. Of particular interest, dinosaur eggs and hatch-lings were also discovered in the same deposits. Other associated fossils within the same deposits, like flying reptiles, birds, mammals, lizards, snakes, frogs, crocodiles and turtles offer a bigger picture about dinosaur’s world and their aftermaths. Most spectacular is a huge pterosaur, or flying reptile, that was named Hatzegopteryx after the region and the town. This enormous creature, perhaps the largest flying animals ever, had a 12-meter wing-span. Also well documented at the Geopark are the volcanic rocks-tuffs, lavas and craters that mark eruptions that took place during the age of the dinosaurs.

Picturesque landscapes and glacial mountain lakes provide the setting for a long human history that stretches from the Paleocene to Roman Antiquity and into the Middle Ages and today. The area is very famous for its historical and cultural sites covering in time a history of more than 4000 years. Impressive are the ruins of the ancient Roman capital of the Dacia province at Sarmizegetusa Ulpia Traiana. The numerous medieval churches and fortresses, as well as the remains of more recent castles, are important cultural heritage. Today Haţeg UNESCO Global Geopark covers 11 municipalities and 80 civil parishes and has a population of 38,500.

All the natural, historical and cultural sites of Haţeg are integrated into the management plan of the Geopark. This plan preserves the sites in order to allow visitors to experience the area’s heritage. The development of sustainable tourism in the region is a major objective of the Haţeg UNESCO Global Geopark, for which farm accommodation, trails and interpretive signs are planned. Among the new attractions, the creation a dinosaur museum with life-size reconstructions of the species from the Haţeg region is the most important.

The UNESCO Global Geopark has activities in education, public awareness, land planning, and nature conservation, encouraging research and education. Interdisciplinary projects are developed by university teachers and students every year. The UNESCO Global Geopark is subject for a MSc program and a case study for the online course European Seminar in Sustainable Development. EDU-Geopark Network was created in partnership with local schools to sustain educational and training programs for kids, teachers and professionals. New courses for local curricula (Discovering the backyard Nature, Local traditions, Geotourism), training courses for tourism guides and educational events are supported. Explorers Clubs are established in 12 schools and Volunteers for Geoparks is a new program to support young people’s involvement in local projects. Small info museums and geo-trails developed in partnership with local associations and communities promote geological heritage. Traditional activities and local products (handicrafts, brandy, cheese, meat) are supported in partnership with Women Association as part of the local strategy to promote geotourism and ecotourism.