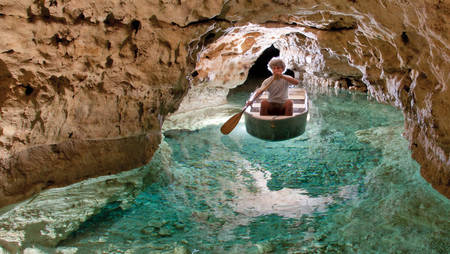 The Bakony–Balaton UNESCO Global Geopark is situated in the central part of the Hungarian Transdanubia, in the north-western part of the Carpathian Basin of Central Europe. The UNESCO Global Geopark, encircled by young folded mountain ranges, is located at the boundary of four major geographic regions. Therefore, it is characterised by a great variety of geological, topographic, climatic and hydrological features and a great biodiversity: in the North the Transdanubian Range, in the South the Transdanubian Hills, in the East the Great Plain, and in the West the Little Plain. These areas surround Lake Balaton which is the largest lake in Central Europe. The predominant part of the UNESCO Global Geopark belongs to the so-called ’Bakonyvidék’, which comprises the following terrains: North Bakony (Mt Kőris, 709 m), South Bakony, Balaton Uplands and Keszthely Hills. The Tapolca Basin is situated between the three latter regions.

The UNESCO Global Geopark area is a geological–geomorphological mosaic and comprising 172 different formations. Bakony–Balaton UNESCO Global Geopark, with its long tradition of geological research is one of the places on Earth where the outstanding geodiversity is not only described in scientific papers but is also beautifully reflected in the landscape. The four hundred million year old metamorphic rocks, fossil-rich Alpine Triassic carbonate rock sequences, dinosaur-bearing Cretaceous rocks and tropical tower karst (Bakony Mountains), sediments of the former Lake Pannon containing diverse endemic species of molluscs, gorges and karst plateaux featuring 700 caves, hundreds of sinkholes, a 12 km long thermal water maze under a living town (Lake Cave of Tapolca, our most visited geosite) and Europe’s largest warm lake (Hévíz) can be found in the UNESCO Global Geopark. The emblematic volcanic remnant hills of the Tapolca Basin (Pliocene) and ‘seas of stones’ around Káli Basin are also geological-geomorphological curiosities.

The ‘Bakony–Balaton Geopark Contest’ has been organised annually since 2008 for students living in the area. Outdoor educational activity days, guided geohikes, in- and outdoor geoschool programmes and geocamps are also excellent occasions for school groups to learn about and to build up awareness towards geological heritage. The UNESCO Global Geopark provides a rich geotourism offer for those who are interested in the geological processes and spectacular geological phenomena of the UNESCO Global Geopark. We lay great emphasis on the interpretation of this geological heritage though 7 visitor sites, 10 nature trails, numerous guided geotours and guided caving tours. Since 2009 the UNESCO Global Geopark has organised 7 geotour-guide training courses in cooperation with civil organisations. The courses enable local individuals, service providers and communities to widen their sustainable touristic offer. Many local governments, civil organisations have cooperated and help to renew and maintain geological heritage sites and a visitor-friendly interpretation infrastructure.