“The formation of the Pyrenees” 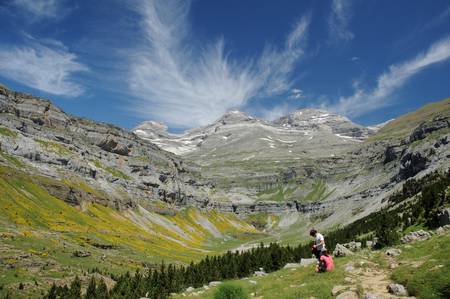 The Sobrarbe-Pirineos UNESCO Global Geopark comprises the entire territory of the Sobrarbe region. It is located in the north of Spain, province of Huesca (Aragon), on the southern slope of the Pyrenees and bordered to the north by France.

The geographical context is diverse since a few kilometres apart are the lowest sites of the UNESCO Global Geopark (reservoir of El Grado, 475 m) and the highest point of the region (Llardana, 3375 m). The climatic conditions range from Mediterranean to the high mountain climate.

From north to south, this territory of 2,202 km² is characterized by four main geomorphologic units. In the axial zone of the Pyrenees are the oldest rocks in the area (about 500 million years). Along with these, the rocks of Mesozoic and Cenozoic of the Inner Sierras form the most important limestone massif in Europe, the massif of Monte Perdido, with peaks over 3,000 m.

The Sobrarbe-Pirineos UNESCO Global Geopark is located on the south slope of the Pyrenees. Its peaceful and beautiful landscapes still bear witness to processes that have taken place during 500 million years of the Earth’s history. With half of its area designated a protected natural reserve, Sobrarbe’s biodiversity and geodiversity are truly impressive. The relationship between tectonics and sedimentation are especially visible in many sectors of the UNESCO Global Geopark and has international relevance. Its main geological attraction is the formation of the Pyrenees: the disappearance of the Tertiary narrow sea, the collision of continents and the emergence of the mountain chain, then its erosion over the course of Ice Ages. Rocks from the Cambrian to the Quaternary are present in the UNESCO Global Geopark, encompassed in the main geological units of the Central Pyrenees. Rock materials reflect the effect of two orogenies, the Variscan and the Pyrenean.

During the Quaternary the landscape has been shaped through morphogenetic processes, mainly glacial, periglacial, karst and rivers, all of them active in varying degrees. The glaciers of Monte Perdido, Marboré and Llardana are still active. Erosive and depositional morphologies of all phases from the Pleistocene glaciers to the Little Ice Age are clearly visible in the area. Karst is especially abundant and the fluviokarstic ravines are a characteristic feature of Sobrarbe. The Cinca river and the Ara river have terraced deposits systems correlated with their ancient glacial moraines, providing interesting paleo-environmental information. Finally, slope processes such landslides complete the wide range of morphologies and active processes present in the UNESCO Global Geopark.

The Sobrarbe-Pirineos UNESCO Global Geopark is composed of 19 municipalities, with a total of 150 inhabited areas and 7.600 inhabitants. Local inhabitants appreciate and respect their landscapes, so their representatives have taken the initiative and created an organisation focused on the territory’s development in a sustainable way, including scientific and educational activities.

The UNESCO Global Geopark has developed its conservation strategy through the inventory of geological sites, in cooperation with the Spanish Geological and Mining Institute. In addition, strong education strategies have been developed by creating geological itineraries for primary and secondary schools, an intensive course on geological heritage for university students, and an annual seminar for the general public. These general activities are complemented by other concrete actions like a training course for geological heritage guides, aimed to create new resources and new employments for the local enterprises. From deep valleys to tree–covered mountains, visitors can wander across a network of pathways and discover a rich variety of geological, natural, historical and architectural points of interest, as well as their folklore and legends.