“According to mythology, Achilles was invulnerable as, just born, his mother Thetis plunged him into the waters of the Styx. However, his ankle wasn’t exposed to water. There, later, Paris will find the opportunity to kill him with an arrow” 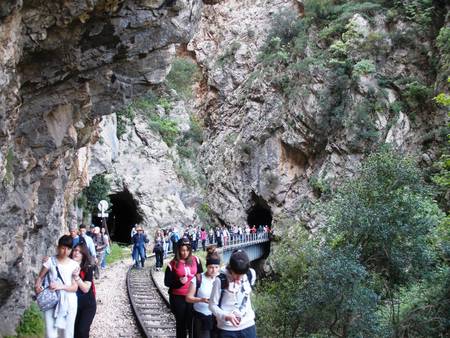 The Chelmos Vouraikos UNESCO Global Geopark is located in North Peloponnesos, Greece, 200 km from Athens and 100 km from the city of Patras.

What happens when a tower of sand is left on the beach exposed to rain? It will change its form, take on some strange shapes, and eventually become one with the sand. With the action of water and other natural factors, Chelmos Mountain developed many distinct forms, over millions of years, such as the impressive gorge of Vouraikos, the beautiful Cave of Lakes, the cold Springs of Aroanios river, the mythical waters of Styx, and the Tsivlos and Doxa lakes. Lakes are found not only on the surface of the earth, but also underground, and one can discover the Cave of the Lakes visiting three of its thirteen underground lakes. It is a lovely old cave, an underground river bed with an explored length of 1,980 meters 500 meters are accessible to visitors. On the lower level of the cave and close to its natural entrance, human and animal remains have been found.

The alpine nappe sequence of the wider area of Chelmos Vouraikos UNESCO Global Geopark comprises of 3 units: 1) Arna unit, consisting of the phyllites and quartzite series, 2) Gavrovo - Tripolis unit, consisting of the Tyros beds, a neritic carbonate sequence and flysch, and 3) Olonoos - Pindos unit, representing all its formations from the Triassic clastic formation at the bottom up to the Eocene flysch at the top. The Pindos unit is intensively folded and forms successive thrusts from east to west. Post alpine deposits consist of i) fluvial, ii) fluvial-lacustrine, iii) lacustrine, iv) fan delta, and v) marine. Quaternary lacustrine and fluvial deposits outcrop at the south, central and eastern part of the UNESCO Global Geopark area, whereas the well-known Quaternary fluvial-lacustrine formations, the fan delta deposits and the marine deposits outcrop at its northern part.

The UNESCO Global Geopark is located within two prefectures of N-W Peloponnesos, namely Achaia and Korinthia. The Geopark occupies an area with 62 settlements, villages and towns.

In the Chelmos Vouraikos UNESCO Geopark there are several areas protected by local and national laws, sensitizing people to the importance of geoconservation within nature conservation. The first aim is to educate young people in order to respect and conserve nature. The Chelmos Vouraikos UNESCO Global Geopark offers presentations and possibility for discussion at its information center in Kalavryta. Through the years there have been numerous visits from Universities, schools and collaborating Environmental Centers from all over Greece. There are several educational programmes adapted to Greek school programmes where students and teachers can apply together in a real context what they learn in the classroom. In order to cater for tourists, the Geopark has developed an information centre, several view points and trails. These facilities help the visitor to understand how geology provides the basis for a biological, archaeological and cultural richness. The visitors are also informed about the geo- and biodiversity of the region, the legislation that applies to the area and the actions undertaken for sustainable development and management as well as other important environmental topics. The intensive collaboration with the Environmental Education Center of Kleitoria – Akrata greatly improved our environmental education projects and outdoor activities with schools and groups working on several environmental projects. Every year, along with the Pan‐Hellenic crossing of Vouraikos gorge, a public workshop is organized for the promotion of the protected areas, their protection, management and sustainable development.