“A landscape shaped by warm and cold climates” 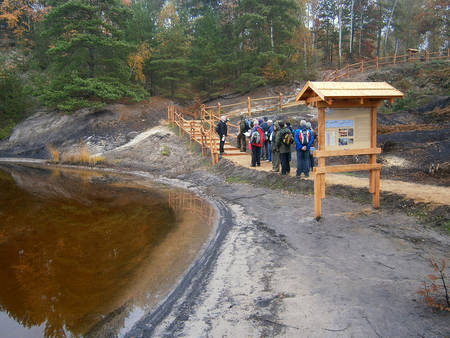 The Muskauer Faltenbogen / Łuk Mużakowa UNESCO Global Geopark is a German-Polish transnational Geopark covering an area of 578.8 km². It is situated in the imaginary midpoint of the triangle formed by the three cities of Berlin, Dresden, and Zielona Góra.

The UNESCO Global Geopark covers part of the North-Central European ice age landscape and was built up during three ice ages. Its central geological unit is one of the most scenic push moraines in Europe: the Muskau Arch, created during the oldest of the three European ice ages 340,000 years ago. It is 20 km long and 20 km wide. The load of the glacier caused subsoil compaction down to a depth of about 300 m while deforming the horizontal successions of sand, gravel, clay, and lignite beds of Tertiary age. The unconsolidated rock masses in front of the glacier piled up to form a terminal moraine of some 150 m about the ground level. During last ice age the moraine was further shaped by fluvial activity which formed a 30 m deep valley with numerous meanders and terraces. The area has numerous occurrences of lignite, dunes and important cold iron-sulphate-mineral springs.

The Muskauer Faltenbogen / Łuk Mużakowa UNESCO Global Geopark comprises parts of the German Federal States of Branden-burg and Saxony as well as of the Polish Lubuskie Province. It has about 80,000 inhabitants living in three rural districts with 19 provincial towns and municipals. The south part belongs to the Sorbian settlement area.

The entire area of the Muskauer Faltenbogen / Łuk Mużakowa UNESCO Global Geopark is geared to combine the principles of ecology, economy and social interests. The principle of conservation of nature, cultural areas and of the post-mining landscape go hand in hand with the development of tourism and not only helped locals to enhance their identification with their region but also contributed to economic development. The selling points of the UNESCO Global Geopark are three-fold: the well-formed push moraine with a naturally-defined boundary, the post-mining & cultural landscape inherited from 130 years of resource-based mining development between 1840 and 1970, as well as a cluster of different types of loose rock geotopes in a relatively small area. These are the basis for a comprehensive educational concept which reaches from natural to man-made climate change, use of raw material and later re-naturalization of historical and recent mining districts.