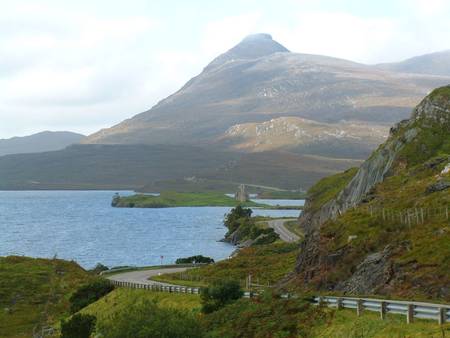 The North-West Highlands UNESCO Global Geopark is located in the far north west of Scotland. The area encompasses some of the finest mountain and coastal landscapes in Britain and contains a wealth of geology. The rich natural heritage is recognised by the high number of designated areas with a focus on geology and conservation.

The North-West Highlands UNESCO Global Geopark territory hosts a wide range of rock formations covering two-thirds of the Earth’s history. It contains some of the most important and diverse geological and geomorphological features in Britain. Each rock type inspires its own distinctive landscape of world-class quality and significance. The unique landscapes strikingly reflect the underlying geology, dominated by the internationally important Moine Thrust Zone, which runs from north to south.

As the “Cradle of Geology” this UNESCO Global Geopark contains the oldest rocks in Europe (Lewisian Gneiss - 3 billion years old). These rocks are characterised by the typical rugged 'cnoc-and-lochan' landscape. Several 'insel-bergs' occur on top of the Lewisian Gneiss. These are formed by the circa 1,000-million-year-old Torridonian red sandstone. Other inselbergs are capped by white Cambrian Quartzite - often covered in vast blockfields, since the quartzite was highly susceptible to frost-shattering during more recent Ice Ages. East of the mountains is the wild, boggy country underlain by the enigmatic Moine rocks. The Moine Thrust is recognised as the most significant crustal dislocation of its type in North West Europe. Tell-tale signs of the past Ice Age can be found throughout the area. The coastal scenery also reflects the geology. Where the coast is formed by Lewisian Gneiss there are numerous small coves and craggy headlands. In contrast, high cliffs and occasional sea stacks such as the Old Man of Stoer characterize coast formed by Torridonian sandstone. The UNESCO Global Geopark also contains the earliest evidence of life to be found in Europe: simple-celled algal life (stromatolites) occurring in Torridian Sandstone (1.2 billion years BP).

The North West Highlands is a key area in the history of geological science. During the 19th century, the so-called 'Highlands Controversy' raged over the relationships of these rocks, ending with the recognition of the complexities of the Moine Thrust Zone, now recognised as one of the most important structures of the circa 400-million-year old Caledonian Mountain belt. Thrust structures were first discovered and proved by pioneering Victorian geologists, demonstrating that older rocks could be pushed towards, up and over younger rocks. Hundreds of geology students from around the world are still trained in the region every year. Geological interpretation that helps the visitor to appreciate and understand the geological processes in the area is already well developed. The area exhibits a unique and immediate relationship between landscape and the underlying Geology. “The landscape is the Geology; the Geology is the landscape”.

The area also has many historic sites, ranging from Iron Age defensive towers, remains of Norse settlements to castles and houses related to the Lordship of the Isles.

Within the UNESCO Global Geopark, settlements are few and far between with a population density of 1.2 person/km2, presenting fragility and high costs of service-delivery mainly from the East Sutherland, up to 80 miles away. Tourism, particularly landscape and wildlife, is the main industry, whilst many are employed in the public sector, the primary sector, including crofting, aquaculture and fishing.

There are two Tourist Information Centres with geological displays and one 24 hour visitor centre at Knockan Crag, which is solely dedicated to the Moine Thrust. Twelve interpretative panels occur at viewpoints. An active Highland Ranger Service organises guided walks throughout the summer.

The UNESCO Global Geopark engages with its 2 high schools and 6 feeder primary schools. The imbalance of declining school roles and decreasing workforce creates under-employment and depopulation. The UNESCO Global Geopark provides rock boxes, talks, walks, and tours to encourage a sense of place so that young people will aspire to stay and return; advises on climate change, geobiodiversity and geoarchaeology to provide health and wellbeing for adults; and, delivers contracts and agreed services with partners. The UNESCO Global Geopark meets with the University of the Highlands and Islands on a regular basis, delivers geology courses and campaigns for the teaching of geology and other earth sciences at secondary level. North-West Highlands Geopark Ltd is a company limited by guarantee, a social enterprise with a membership rather share-holders. Community Councils elect 7 of the 12 directors and the membership-in-residency elects another 5 at the annual general meeting. It employs 5 people and 12 volunteers.