“The story of how Ice, Water, Wind and Man has created a fascinating landscape” 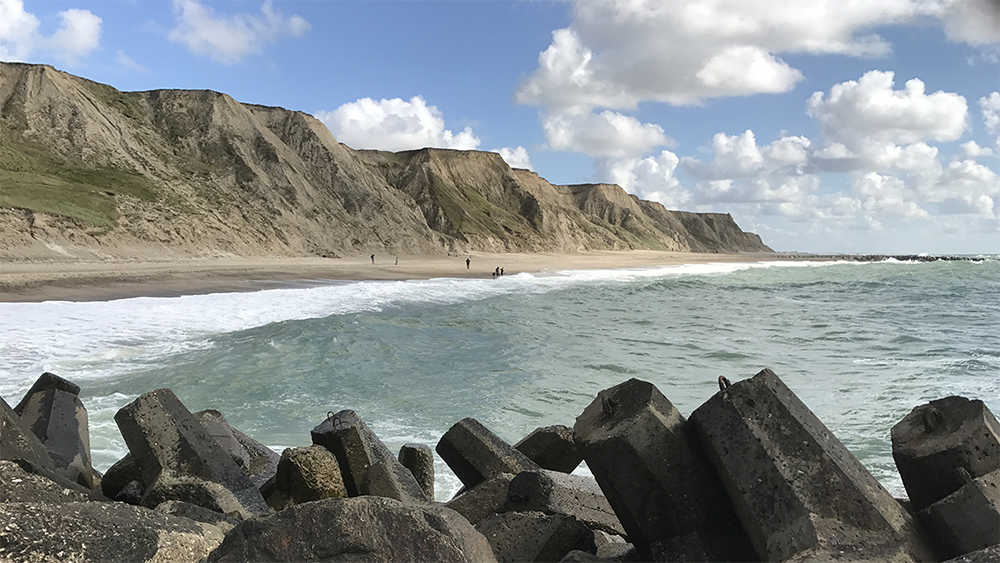 During the Quaternary period of Earth history, enormous ice sheets sculpted the impressive ice age landscapes that form the core of Geopark West Jutland. These landscapes mark the final period  when  the  Earth  was in  a  deep  freezer  and when  the  Scandinavian  Ice  Sheet extended from the mountains of Norway down to Denmark. In addition to the ice age landscapes there is a series  of other  landforms  that  developed  after  the  end  of  the  ice age  by  rivers  and  coastal processes, as well as by the powerful westerly winds thatcharacterize the west coast of Denmark. There are also remains of older geological deposits from the Tertiary and the Quaternary in some of the cliffs. The unique glacial landscape in western Jutland was mapped over 100 years ago by the geologist N.V. Ussing who identified, amongst other features, the Main Stationary Line as a marked boundary in the landscape between a hilly glacial landscape and flat outwash plains. This landscape  developed  as  a  result  of repeated  ice  ages that  each contributed  to its formation.  It was however, during the last ice age –the Main Advance that tookplace 23.000 -21.000years ago when the ice reached its maximum extent –that most of the landscape in the geopark was formed.The proposed UNESCO Global Geopark West Jutland holds 48 geosites which include:1 designated geosite of international importance:the Bovbjerg Cliff26 geosites which are situated fully or partly in 8National areas of Geological Interest12 geosites which are situated fully or partly in 5 ofthe National Coastal Landscapes. Additionally,  the  Geopark  has  also  described  48  non-geological sites  of  natural,  cultural  and intangible heritage interest.

Geopark  West  Jutland  is located  in  the  Central  Denmark  Region  and  includes  the  three municipalities  Lemvig,  Struer  and  Holstebro,  a  part  of  the  Limfjord  and  extends  about  50  km offshore into the North Sea to also include part of the Jutland Reef. The Geopark has a total area of 4,759 km2. Of this, the land area makes up 1,560 km2, marine areas in the Limfjord covers 425 km2and marine areas in the North Sea covers the remaining 2,775 km2. In total Geopark West Jutland  has  218  km  coastline.  67%  of  the  land  area  is  used  for  agriculture  and  forests  cover 13.8% of the area. Major lagoons and lakes in the Geopark are: Nissum Fjord (70 km2), Ferring Sø (3.2 km2), Kilen (3.34 km2), Flyndersø (4.18 km2) and Stubbergård Sø (1.5 km2). A section of the river Storå, which is the second longest river in Denmark runs across the Geopark from east to its outlet in Nissum Fjord to the west. To the east the Geopark borders on the Karup River. The Geopark area includes 13 Natura 2000-sites and 5 Nature and Wildlife Reserves.The highest point is Bavnehøj near Lemvig at 89.5 m above sea level and the lowest point is 2 m below sea level at the bottom of the drained lake Vestersø northwest of Lemvig.The population of Geopark  West  Jutland  is  99,534 (2015).  The  biggest  cities  in  Geopark  West  Jutland  are Holstebro (34,873 inhabitants), Struer (10,261 inhabitants) and Lemvig (7,131 inhabitants). There are  29  other cities  in the  area  whichin  size  vary from  200  to  3,000  inhabitants. Transport  and trade together with Industry and raw materials are the dominating business sectors by number of jobs. Noteworthy is that the primary sector with forestry, agriculture and fisheries employs 7% -14% of the work force which is much higher than the national average of 4% for this sector.