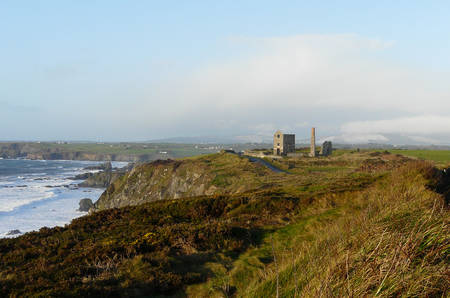 The Copper Coast UNESCO Global Geopark is located on the south east coast of Ireland, between Tramore and Dungarvan in County Waterford. To the north lie the Comeragh Mountains which reach a height of 750 m. The area is a relatively flat lying glacial outwash plain, much covered by glacial till and bog, with occasional spectacular erratics. Three roughly N-S rivers dissect the UNESCO Global Geopark and display excellent examples of glacial erosion and deposition (an excellent walk follows the Ann river starting at Annestown). The coast is spectacular with numerous sandy and rocky coves displaying sea stacks, arches and blow holes. It comprises some 25 kilometres of spectacular coastline consisting of scalloped beaches and coves buttressed and enclosed by rocky headlands.

The Copper Coast is an outdoor geology museum with a geological heritage that reflects the variety of environments under which the area has evolved over the last 460 million years. Sedimentary and volcanic rocks define a cross-section through the core of an Ordovician age island arc volcanic system (ca. 460-455 Ma) which extended along the south-eastern flank of the Iapetus Ocean. A fossil rich siltstone/limestone (c. 462-457Ma) marks a hiatus above which the sequence is dominated by felsic volcanic rocks, with intrusive equivalents interspersed with shales, some graptolitic. Spectacular columnar jointed rhyolite is well exposed at one locality. Semi-arid fluviatile sediments (ca. 370-360 Ma), now reddish brown coloured conglomerates, sandstones, siltstones and shales, rest with marked unconformity on the Ordovician. An enormous gap in geological time separates these sequences from those next exposed, unconsolidated tills, boulder clays and outwash sands and gravels of the Quaternary period (Pleistocene epoch) all deposited with very profound unconformity on the Ordovician and Devonian sequences.

Cross-sections of these rocks are exposed along the spectacular cliffs and are interpreted for the public at various points. For a brief introduction to these rocks, a stroll around the Geological Garden in Bunmahon will prove instructive. Copper was mined extensively in the area during the 19th century. The Geopark’s name is derived from this activity, and the Copper Coast icon is derived from the conserved remains of a mine complex on a high point of the cliffs. Panels there explain how the mine worked.

The UNESCO Global Geopark extends between Tramore in the east, towards Dungarvan in the west, and comprises six local communities (Dunhill, Annestown, Boatstrand, Kill, Bunmahon and Stradbally), each with their own featured attractions ranging from mini farms to geological gardens. The population within the Geopark is approximately 5000 (in 2011). These communities, with the support of the Geological Survey of Ireland, were involved with the Geopark from its inception as they were looking for ways to develop sustainable geotourism in this rural area.

There is also a rich cultural heritage – Neolithic dolmens, Iron Age forts, pre-Christian inscribed stones, ruined medieval churches and a spectacular castle owned by one community group. Very recently, the Geopark acquired a disused church building and will transform it into a new Geopark Centre which will serve not only as a community and visitor centre, but also offer a range of services and facilities. It is intended that such services and facilities will contribute to the long term financial sustainability of the Geopark and create sustainable employment opportunities.

At Primary level the Geopark focuses on a fun, interactive, discovery learning style while activities at Secondary school level utilise the UNESCO Global Geopark as an outdoor laboratory and are closely tied to the curriculum, but also fun! For local schools the Geopark aims to build pride in the community. They work with universities (undergraduate and postgraduate) and with adult education centres covering a wide range of subjects including local geology, archaeology and architecture. The Geological garden (a walk through time) serves to explain key events in the earth’s history (flora and fauna evolution, climate change, plate tectonics etc.), and is a popular picnic spot. They use kite aerial photography, geophysical surveys and seismometers to make learning exciting. The new Geopark Centre allows for hands-on learning as well as specialist talks and demonstrations. Trained guides offer a variety of tours and courses making use of outreach centres such as Tankardstown mine complex, Fenor Bog and Dunhill Castle.