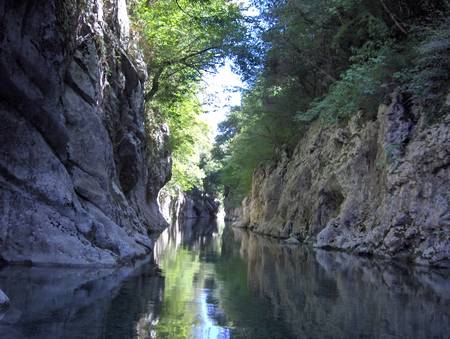 The Cilento, Vallo di Diano e Alburni UNESCO Global Geopark is located in the province of Salerno, Campania and occupies the whole territory of the National Park of the Cilento and Vallo di Diano. The Geopark extends from the Tyrrhenian coast to the margin of the Lucania mountains. In the territory of the Cilento, Vallo di Diano e Alburni UNESCO Global Geopark, the high number of geosites, unique and scientifically valuable, as well as their geodiversity, confirm the consistency of the geological heritage of this area in southern Italy. The area is made up of sedimentary rocks both carbonate and siliciclastic. The Cilento region can be defined as a "Morpho-structural Province", which represents a sub-unit of the larger Campanian-lucanian Tectonic Region. The area belongs to the Southern Apennines fold-and-thrust belt, which developed between late Cretaceous and Pleistocene ages as a consequence of the interaction between the European and the African plates and spreading of the Tyrrhenian oceanic basin. Due to the long and complex lithogenetic and orogenetic history, several litho-stratigraphical units in form of nappes and/or irregular sequences can be distinguished. Such nappes are grouped as internal units and external units, according to the original position before the tectonic deformation. Quaternary postorogenic deposits help us understand the geomorphic processes on the relieves and on the plain and coast, relating also to climatic changes. We can find 130 million years old Mesozoic limestone and dolomite, Mesozoic pelagic deposits and 16-6-million-year-old Miocene siliciclastic turbidite. These rocks represent a key in the evolution of the central Mediterranean.

Moreover, several endemic animals, such as the wolf and otter, have been protected since 1997 by the “Man and Biosphere” programme of UNESCO.

Since 1998 the archaeological sites of Paestum and Velia and the monumental assets of Chartreuse in Padula have been recognized as World Heritage by UNESCO. More recently, in 2010, UNESCO recognized the Mediterranean diet as intangible heritage of humanity. The countries that submitted a project for this award were Italy, Greece, Spain and Morocco, and the National Park of Cilento and Vallo di Diano represented Italy. In this context, rich in other significant natural and cultural features, one can find attractive routes, where the geological heritage can be connected with the life of nature and human history.

The annual program of environmental education in the schools of the Cilento, Vallo di Diano e Alburni UNESCO Global Geopark has the purpose to introduce the young generations to environmental problems helping them to understand the values of the territory in which they live and the necessary actions for the correct maintenance and fruition. Projects for popularisation have been planned to integrate excursions to the territory into this school program to provide direct knowledge of the natural beauties and particularly of the geo-diversity in the area. The educational program is divided into modules and learning units, and includes a number of proposals for environmental education, differentiated by themes and targets: biodiversity, geodiversity, landscape, sustainable development, nutrition education, sports & nature.