“Uplift area at the Northern Rim of the Harz Mountains” 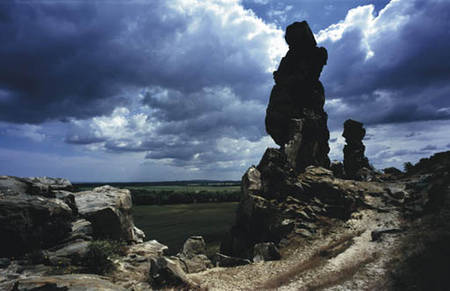 The Harz Mountains are composed of Paleozoic sediments and magmatic rocks. They have been extensively documented over the past 1,000 years in historical accounts of mining and research. The Braunschweiger Land/Ostfalen area is famous for its fossil-rich sediments of the Mesozoic and Neozoic eras. A unique landscape with numerous deposits (iron ore, brown coal, salt, oil) came about here as a result of the elevation of salt structures. The "Classic Square Mile of Geology" is an area at the Northern reaches of the Harz Mountains near the town of Goslar (the Prussian Mile is equivalent to 7,53 km). The essence of this area, also called the "Golden Square Mile", consists of the close contact between the Variscan bedrock and the precipitous Mesozoic overlying rock, with many reference outcrops. This coexistence of the Palaeozoic Harz Mountains and the Mesozoic foreland describes the importance of the whole UNESCO Global Geopark perfectly.

The cultural history of the region with its renowned monuments, including the world heritage of Goslar and Quedlinburg is closely linked to the geological characteristics of the landscape. Additionally, the region contains important sites in early human history such as prehistoric graves. Neanderthal remains and the world’s oldest spears, the Schöningen Spears, have been excavated nearby. Nowadays, the Harz Mountains belong to the five most famous tourist destinations of Germany. The main attraction is the Brocken mountain (1,141 m). In addition, there are also visitor’s mines, caves and museums, for example the world cultural heritage site of Rammelsberg. On numerous geo-trails and nature paths and at geopoints, visitors can experience the attractions of the Geopark either independently or under the guidance of trained personnel. For this purpose, information booklets and leaflets are available, for example the "Landmarks", which give an overview of the Geopark region. For the establishment of the landmark network, local partners are involved. In co-operation with museums and schools, special educational activities are continuously being developed.

Visitors can experience the attractions of the UNESCO Global Geopark independently or under the guidance of trained personnel. The emphasis is on activities for children and juveniles, but also for adults. The target is to illustrate the basic facts in easy learning-units. This may be done on a day trip or during school trips, but it may also be part of regular lessons. Regional products like food, jewelry and books are produced in the region and are sold by partners such as hotels and restaurants.