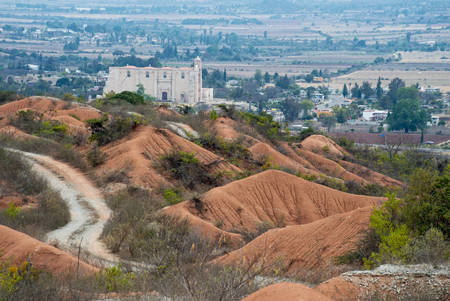 Mixteca Alta, Oaxaca UNESCO Global Geopark is located in the Sierra Madre del Sur physiographical province, a mountain region bounded on the north by the Mexican Volcanic Belt. From a geological point of view, this region is considered the most complex of Mexico. It consists of Precambrian (more than 500 million years old) and Paleozoic metamorphic and plutonic rocks (250-500 million years old) that make up the complex basement. A carpet of Mesozoic rocks (60-250 million years old) - marine for the most part - and Cenozoic volcanic flow rocks and continental sediments (less than 60 million years old) covers everything.

Many of the 35 selected geosites are related to erosional-depositional processes and landforms associated with the millenary intensive use of land for farming purposes. A number of geosites were selected to explain these links, including: gullies and badlands, mass wasting features, lamabordos and palaeosols. Other geosites include plutonic and tectonic structures (dikes and sills, faults) and outcrops featuring spheroidal weathering.

The name of the UNESCO Global Geopark is derived from the Mixteca civilization, which flourished between the 2nd century BC and the 15th century AD and ended at the beginning of the 16th century AD with the arrival of the Spanish conquistadores. The territory has some of the most important traces of Mesoamerican Mixteca culture. Human presence in Mixteca Alta (circa 3,400-3,500 years BP) is established based on radiocarbon dating of soil organic carbon present in agriculture terraces known locally as lamabordos. The lamabordos were an alternative agriculture innovation for food production for a population that reached 50,000 inhabitants during the Post classic period, around 1000 to 1520 AD, located at 111 sites.

Mixteca Alta in general, and in particular the nine municipalities included in the project, are characterized by a low population density and demographic growth. Due to the lack of economic opportunities, emigration to urban areas and abroad (United States of America) is significant and keeps population in low numbers. The total population is about 7,000 inhabitants. Most of the population is indigenous and includes groups such as the Chinantecos, Mixes, Mazatecos, Zapotecos and, mainly, Mixtecos.

Most of the economically active population in Mixteca Alta, Oaxaca UNESCO Global Geopark is employed in the primary sector (agriculture and forestry) (47%), while the remainder is distributed between the secondary (20%) and tertiary (commerce and services) (33%) sectors. Agriculture is, in general, complementary to other activities is mainly for self-consumption.

The Mixteca Alta region is a popular touristic destination for Mexicans and foreigners. Tourism is based on extraordinary attractions including pre-Hispanic, Hispanic and contemporary sites. There is a set of facilities available in the Geopark, such as a Visitor Centre, museums and historical monuments and information is also available in all nine municipality halls. Ten geotrails have been designed to enable people to visit geosites and other sites of interest. Visitors are guided along these geotrails by local people, who teach them about the geological heritage and its relationship with ecological, historical, archaeological and cultural heritage.