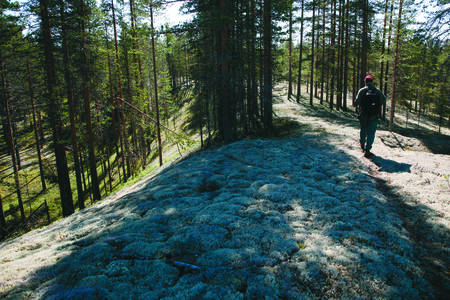 Rokua UNESCO Global Geopark is situated in Northern Finland, about 200 km south of the Arctic Circle between the cities of Oulu and Kajaani.

The UNESCO Global Geopark geosites tell the story of the gradual development of the terrain from below a kilometer-thick ice mass to the deep bottom of the ancient Baltic Sea and further via an island and shore stage to become the present inland area. The UNESCO Global Geopark includes a number of impressive bedrock sites, which are used as examples of the main development stages of the Fennoscandian bedrock area. In addition, the area has in Finnish conditions an exceptionally diverse and high quality range of landscape forms that arose during the time of the ancient continental ice sheet and its melting stage as well as during the uplift process that followed it. The landscape consists of a changing, varied mosaic of thousands of geological formations, including drumlins, hummocky moraines, terminal moraines, esker ridges, kettle holes, ancient shorelines, dunes, ravines and bogs. The UNESCO Global Geopark forms a geological corridor that follows the Rokua esker field and runs in a northwest‐southeast direction. The northern border is River Oulujoki, while in the south the area is bounded by the Rokua esker formation.

In addition to the geology, the areas are also connected by the prehistory of the people who followed the withdrawal of the ice sheet and sea.

The UNESCO Global Geopark includes three municipalities; Muhos, Utajärvi and Vaala. Close to the UNESCO Global Geopark are two of Northern Finland’s significant urban centers. To the northwest, Oulu, the regional center of Northern Ostrobothnia, is Finland’s sixth largest city with around 196,000 inhabitants. To the southeast is the city of Kajaani, the center of Kainuu Region, with a population of around 38,000.

Rokua’s special arctic character, long winter and Finnish traditions make it interesting for diverse visitors to experience. During the winter months, in the middle of a snowy landscape and frozen lakes, one can get a touch of a way of life and scenery of the ice age.