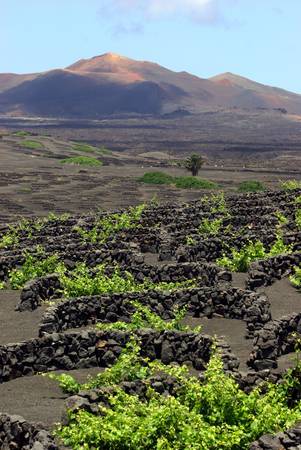 The UNESCO Global Geopark includes the whole island of Lanzarote, the islets La Graciosa, Montaña Clara, Roque del Este, Roque del Oeste y Alegranza, known as “Chinijo Island”, as well as the abrasion platform around these islands, giving continuity and including more geodiversity. Located at the Northeast of the Canary Islands, it is separated by a strip of sea about 100 km from the Northwest edge of the African continent. The island of Lanzarote, known as the Island of the Volcanoes, has a morphology, with a large central oval and two appendices (north and south), which are called Famara and los Ajaches, respectively. The average height is modest in comparison with the other islands of the Canary Archipelago, with the maximum elevation being reached at Peñas de Chache, at 670 meters.

Lanzarte and Chinijo Islands were built almost entirely of basaltic materials during three volcanic, one submarine and two subaerial construction stages. The basement was constructed during the Oligocene epoch and is made of submarine volcanic materials, plutonic rocks and sediment. During the Miocene-Pliocene and Pleistocene-Holocene there were two stages of volcanic activity separated by a lull of at least 2.5 million years resulting in various formations and sedimentary material with the presence of numerous fossil in different levels of raised marine terraces through which the prints of global climatic change can be followed. Two historical volcanic eruptions can be identified: the eruption of Timanfaya (1730-1736) and an eruption in 1824. In the case of Timanfaya, the association of numerous volcanic structures along an extremely long fissure has built one of the largest historic lava fields in the world. The peculiar geographic and climatic situation enables surface observation of numerous rare and well-preserved volcanic, sedimentary and erosion-related structures makes this volcanic ocean island UNESCO Global Geopark an authentic outdoor museum.

The population of the UNESCO Global Geopark is 141.940 inhabitants (2014 census) a third of which lives in its capital, Arrecife. The local economy of the island is based on the tourism sector.

Educational activities are very important for the UNESCO Global Geopark and the tool to perform it is the House of the Volcanoes, an R+D Centre of the Cabildo of Lanzarote that has the follow statutory function: “Education, dissemination and information regarding topics related to volcanology and the natural environment”. The Centre is used by school and college students of all ages and backgrounds from the island and beyond to carry out activities mainly based on the interpretation of the geological heritage of the area and global volcanism. Specifically, the program focuses on the children (3-8 years old) living in rural areas and studying in rural schools many of them surrounded by geosites. The Lanzarote and Chinijo Islands UNESCO Global Geopark has among its facilities for visitors Art, Culture and Tourism Centres. The way in which the tourism centres are managed is public and it is also one of the UNESCO Global Geopark’s means for financial support, as it generates employment for local people, and raises funds in ticket sales offices, gift shops and restaurants, also providing indirect employment.