“A Model Site of Integration of Geo-landscape and Culture” 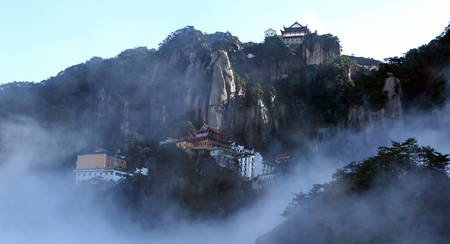 Jiuhuashan, which translates to “Nine Glorious Mountains”, is a UNESCO Global Geopark located in the Qingyang County of China’s Anhui province. Four of these mountains hold sacred Buddhist temples at their peaks, some dating back to the fifth century CE. The geopark covers an area of 139.7km2 with a peak elevation of 1,344.4 m. Within this geopark, there are 57 geosites, including 44 geosites of educational significance, three geosites of international significance and nine of national significance.

The park is dotted with distinct composite granitic massif and large-scale fault-block granitic landforms which emerge above the area’s subtropical vegetation. The mountain range was formed due to the collision between the Eurasian and Pacific plates. Thanks to the abundant precipitation, these mountains are also a major source of fresh water that feeds into the Yangtze River system. Jiuhuashan Geopark is an example of how a large granitic fault-block landforms produce high peaks and oddly-shaped rocks. The dramatic peak-hill-basin complex has influenced the Geopark’s subtropical ecosystems and biodiversity, and are symbolic within this region’s unique Buddhist and Huizhou culture.

The mountainous scenery is highly impressive when seen from one of the 99 peaks in this mountainous area. The peaks are formed along the 14 ridges in the area. The area also contains many waterfalls, deep pools, ancient caves and overhanging cliffs. Many of the temples are hidden in areas of dense forests, and can be a wonderful surprise to find along the region’s many pathways.

The Jiuhuashan’s Buddhist heritage is significant not only because it is tied to the Sino-Korean cultural exchange, but also because it demonstrates the cultural integration of Chinese Confucianism and Buddhism. This unique heritage is jointly protected and upheld by local monks and residents, and has developed into a specific Hui-style architecture and cuisine.

There are approximately 3,000 nuns and monks living in over 350 temples and shrines in this area. The largest temple is the Qiyuansi, or Tending Garden Monastery, which was originally built in the 16th century during the Ming dynasty, and has been remodeled during the Qing dynasty. It has been a religious area for many hundreds of years and continues to be a center for religious studies today.

In 2016, the Geopark received 9.9 million visitors and earned comprehensive tourist income of RMB 11.4 billion (EUR 132.2 million). The Geopark residents have a leading role in both the tourism and environmental and cultural protection of this region.