“Between granite and sandstone – continents on the move” 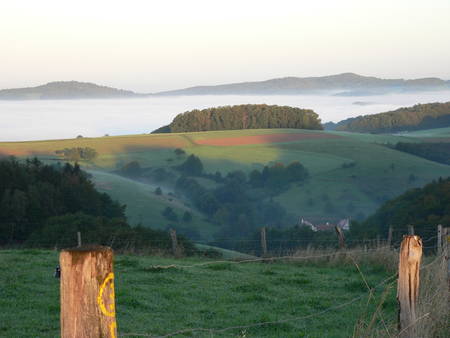 The Bergstraße-Odenwald UNESCO Global Geopark is situated in the southwest of the Federal Republic of Germany, 50 km south of the city of Frankfurt, between the Rhine valley in the west and the Main valley in the east. The region is located between the rivers Rhine (W), Main (N) and Neckar(S), and the Odenwald hills in the centre. It covers an area of 3500 km². Three UNESCO World Heritage Sites (Messel Pit, Lorsch Abbey, Roman Limes) located in the area, are important cooperation partners of the UNESCO Global Geopark. Besides that, one European Nature Reserve for birds is situated in the western part. Based on the geology, the landscape varies from agriculture (Rhine valley) and farming (Crystalline Odenwald) to forestry (Bunter Sandstone Odenwald).

The UNESCO Global Geopark territory represents four major geological units, which provide a record of 500 million years of Earth history. The western “Crystalline Odenwald” consists of plutonic rocks (e.g. granite, gabbro) and metamorphic schists (500 – 340 million years ago). The sandstones and mudstones of the eastern “Bunter Sandstone Odenwald” were deposited in temporary rivers and lakes (245 million years ago). The limestones of the “Muschelkalk” area were deposited in a shallow sea. The rifting of the “Upper Rhine Graben” started about 50 million years ago, and is still active (consistently evidenced by earthquakes). Volcanic phases are documented in basalts, rhyolites and phonolites. Periods of weathering, erosion and deposition during the ice ages (2 million to 10.000 years ago) modified the landscape as we see it today. This region exposes not just a great variety of magmatic and sedimentary rocks, but also the traces of two global tectonic events: the Variscan Orogen, the former trench of a continental collision, and the Rhine Graben, an initial phase of the Alpine Mountain-building. Thus, this region provides an unique window into Earth‘s history, that gives insight in the dynamic processes of our planet. Geological heritage of international significance: UNESCO World Heritage Site “Messel Pit” with unique fossils and climate archive (volcanic maar structure, 48 million years).

Nine counties and 105 municipalities are members of the UNESCO Global Geopark, including the University cities of Darmstadt and Heidelberg. The river valleys have been settlement pathways in historical times (Celts, Romans) and are nowadays routes for economy as well as for tourism.

The unique earth heritage and the rich cultural heritage of the territory offer a broad range of opportunities for the development of geotourism. The Geopark’s visitor system reflects the diversity of the landscape and covers the entire area. Indoor information facilities such as museums and exhibitions as well as outdoor geodiscovery trails and geosites explore the highlights as well as the secret treasures of the region. Strong cooperation with local communities and the promotion of regional products generate a sustainable development. The Geopark has established a multi-tiered service of “ambassadors” for continuous dialogue with visitors and residents of the territory.