“Geological and cultural heritage together in an ancient landscape” 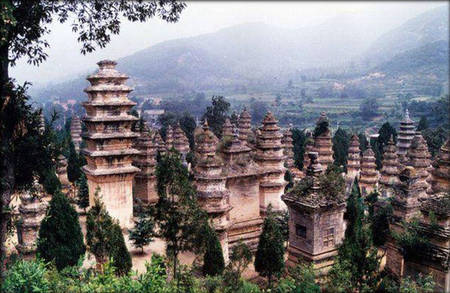 Songshan UNESCO Global Geopark is located in Henan Province. From west to east, it stretches across the mountains and ridges of Ma An, Five Fo, Dan Yang, Shaoshi, and Taishi. These striking hills rise straight up, each seemingly higher than the one before, and make for a grand setting. It consists of 5 scenic areas: Mount Taishi, Mount Shaoshi, Mount Wufo, Mount Wuzhi and Shicong River.

Songshan Mountain rises at the southern extent of North China and reveals 3.6 billion years of geologic history. The Archean, Proterozoic, Mesozoic and Cenozoic strata are well outcropped in Songshan Global Geopark, which is almost the entire Earth history. It has been reputed by geologists as “five generations under one roof”. In a scope of less than 10 km in the Songshan area, the clear contact interfaces of angular unconformity and typical tectonic deformation heritages are well preserved, which were formed by three violent crustal movements 2.5 billion years ago, 1.8 billion years ago and 543 million years ago respectively. They are named by geologists the Songyang orogeny, the Zhongyue orogeny and the Shaolin movement. The UNESCO Global Geopark preserves an important Pre-Cambrian record and provides one of the best places to study the evolution of the Earth’s crust. These strengths make it a valuable resource for popularizing the geosciences in China. Recently in regard to science popularization, more than 20 documents were published by the park, for example: Research on Pre-Cambrian Geological Period, Songshan Geology and Geomorphology, A Glance at Songshan Geology, The Ancestor of All Mountains.

With the development and construction of the UNESCO Global Geopark, local hotel business, restaurant business, retail and other businesses are rapidly growing. In the last ten years, 2 large hotels and 1 travel agency were built around the park. A total of 30 service booths, 3 restaurants, and more than 20 farmer-run motels were newly built or remodeled. More than 2000 jobs were created.