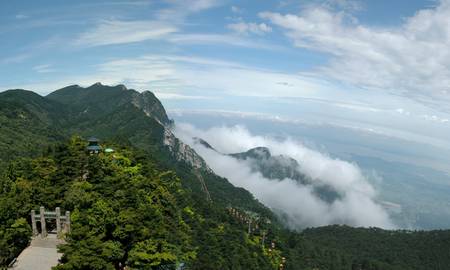 Lushan UNESCO Global Geopark covers an area of 548 km2 in Jiangxi Province, Eastern China. Lushan UNESCO Global Geopark is just located at the boundary between the middle and lower reaches of the Yangtze River, belonging to the north of Jiangxi province, China. The great Yangtze River, the vast Poyang Lake and the beautiful Mount Lushan come together to form a magnificent view.

Lushan UNESCO Global Geopark is a unique multi-genetic complex landscape made up of typical east China mountain quaternary glaciations, horst fault-blocking, metamorphic core complex structures and water erosion landforms. Lushan’s geological development can represent basic rules of three stages of the earth’s development history: the quaternary glaciation study on Lushan started by the renowned Chinese geologist J.S. Lee attracted worldwide attention; the centre of Lushan UNESCO Global Geopark is the MCC structure, the various patterns and styles of the extending structure here are rare. The east and west sides of the mountain are shaped by the cliffs. The west cliffs are a set of high-angle normal faults while the east cliffs are formed by vertical shearing planes. This kind of block mountain is rare globally.

Mount Lushan is a fault-block mountain that resulted from millions of years of tectonic movement, glacial erosion and weathering. Its history of glaciers is particularly important as it contains more than 100 important geologic sites which completely record the process of glacial evolution and provide an important record of palaeoclimatic change. Because it is similar to Quaternary glacial sites in Europe and North America, this record is of value for correlating data and advancing research on global palaeoclimatic change. The vegetation and biological diversity of Mount Lushan contribute to its beauty and aesthetic value.

Lushan UNESCO Global Geopark is a very important cradle of China's culture and the birthplace of one of the country’s most famous poets during the Jin Dynasty. In the past, more than 1,500 thinkers and artists would come to Mount Lushan. These visits resulted in more than 16,000 famous poems and nearly 1,000 papers and picture scrolls. More recently, in the late 19th century and early 20th century, more than 20 countries came to Mount Lushan and built a "World Village" of nearly 1,000 villas. The historic heritage of Mount Lushan is a fusion of geology and culture with great aesthetic value that is the spirit of the Chinese nation.

Geoscience popularization, education and promoting local sustainable development are important missions of the UNESCO Global Geopark. Going into the communities, campus and scenic spots, the park volunteers actively participated in geoscience and geoheritage conservation and environment protection education in various ways with a wide range of participants. Cooperating with universities, colleges and institutions around the park, the UNESCO Global Geopark provides the practice base for students, who act as volunteers of geoscience education as well. The new geoscience popularization readings and animated film are simple, fashionable, and easily understood for the public. Through geo-tourism promotion, the UNESCO Global Geopark income has increased and stabilized with strict financial management, which ensures the funding of geosites conservation and maintenance and renewal of the infrastructure. Due to geoscience popularization, the idea of environmental protection is widely accepted and the management is operating in an effective circular model for sustainable development.