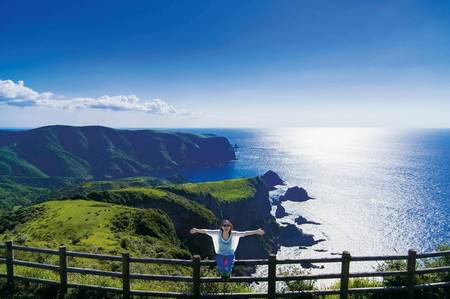 The Oki Islands UNESCO Global Geopark are located in the Sea of Japan in between the island arc of Japan and the Eurasian Continent. The closest landmass is Shimane Peninsula, in the western part of Honshu of mainland Japan, which is approximately 40 km from Oki.

The Oki Islands UNESCO Global Geoparks combine the characteristics of Japan as a mobile belt with the geology of the stable landmass of the Eurasian Continent. The basement of the Oki Islands is a fragment of the Eurasian Continent which was left behind during the formation of the marginal sea, and later overprinted by violent volcanic activity about 7 million years ago which created two volcanic islands. This process and combination of activity is unusual throughout the world. Oki basement gneisses contain evidence of their continental origin, and the extensive alkali volcanic rocks present record the formation of the islands. Coastal erosion of rock faces has created stunning scenery featuring numerous sea caverns and steep sea cliffs. The UNESCO Global Geopark also features a unique ecosystem that is thought to have been formed by climatic change and geographical changes between ice ages.