The only Italian mountain range where you can glimpse three seas” 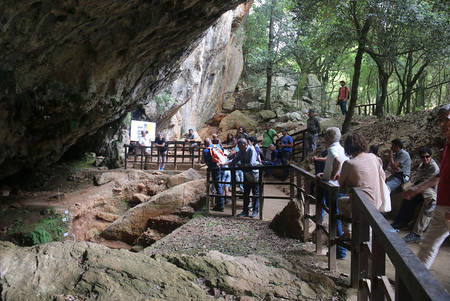 Pollino UNESCO Global Geopark is located in Southern Italy. The area consists of several massif mountains, between the Ionian and the Tyrrhenian Sea that rise up to the higher elevations of the Southern Apennines: the Pollino Massif, the Orsomarso mountains and Mount Alpi. The Pollino massif consists of five summits all over 2000 m, of which the highest point is Serra Dolcedorme at 2267 m above sea level, it is the highest point of the Southern Apennines, and the only Italian massif from where it is possible to get a glimpse of three seas: the Ionian, the Tyrrhenian Sea and the Adriatic.

The area of the Pollino chain has always been of great geological interest in the Mediterranean and southern Italy regions. It represents one of the keys for understanding the structural relationship between the peloritano-Calabrian Arch and Southern Apennines because it connects the sedimentary soils of the Apennine limestone and the crystalline metamorphic and sedimentary geology of the Calabrian Arch. This touch point is identified as the "Fault Sangineto" located immediately south of the mountain chain of the Monti dell'Orsomarso. It marks the point of contact between the Apennines and the Peloritano Calabrian Arch. The geological and structural characteristics of the units that appear in the Apennines of Calabria and Lucania, constitute one of the ways that we are able to reconstruct the main stages of development of this orogen. In addition, the ophiolitic units provide information on the processes of accretion that developed between the Late Cretaceous-Eocene and Oligocene following the closing Tethys Ocean.

The UNESCO Global Geopark covers 1,925 km2 and includes the administrative territories of 56 municipalities, 24 of which in Basilicata and 32 in Calabria. The resident population consists of 150,624 inhabitants. For several years the UNESCO Global Geopark has been developing a number of actions aimed at raising awareness of local communities with regard to the protection and enhancement of the geological and environmental aspects including the following: