“Home to the second largest mercury mine in the world” 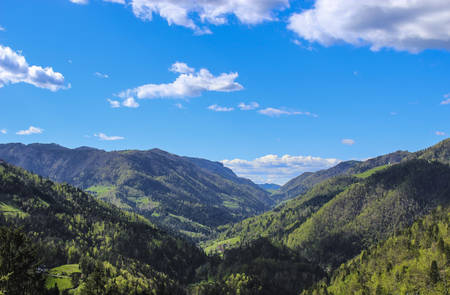 The Idrija UNESCO Global Geopark is situated in the western part of Slovenia, approximately 60 km from Ljubljana. It is located at the junction of the Dinarides and Alps mountain ranges. This has resulted in exceptional geoheritage of deep gorges where a variety of rocks have been discovered in remarkable stratigraphic cross sections, tectonic phenomena and mineral and fossil deposits. In addition, water contributes to the variety of the terrain with numerous features and water courses.

The extensive tectonic movements shaping the terrain within the Idrija UNESCO Global Geopark, began in the Anisian, lasting throughout the Triassic. The area’s mercury ore deposits, supporting 500 years of mining, and now a UNESCO world heritage site, was formed during this period. Owing to complex tectonic events, the carbonate sedimentation was interrupted in the Upper Cretaceous, forming flysch rocks in the foreland basin. Due to extensive tectonics, the majority of contacts between the sequences of different Carboniferous to Paleocene-Eocene rock strata are tectonic. Most of the rocks are carbonates and clastic sedimentary rocks of Permian, Triassic and Cretaceous age. Outcrops due to Ladinian volcanism have been found in the western part of the UNESCO Global Geopark. Due to the pushing of the Adriatic microplate under the European plate in the Miocene, the terrain has a typical thrust structure.

The Idrija UNESCO Global Geopark lies within the Municipality of Idrija, with a population of 12,000 inhabitants.

Idrija UNESCO Global Geopark places great emphasis on raising awareness among the younger generations, on the importance of its heritages. The UNESCO Global Geopark connects and collaborates with different institutions and individuals concerned with the preservation of the area’s heritage (Idrija Mercury Mine, Idrija Mercury Heritage Management Centre, the Idrija Municipal Museum, the Municipality of Idrija, Slovenian National Commission for UNESCO, various associations and non-governmental organizations). Activities include education, particularly through the innovative integration of natural and cultural heritage in educational programs for local schools. For this purpose, a network of elementary schools has been created, with joint practical activities in the town and in rural areas. The UNESCO Global Geopark’s main objectives are the integration of heritage with educational activities of local schools, improving heritage awareness, popularising science content and promoting creative thinking.