“Beautiful natural environments, people live in geodiversity from the formation of the Sea of Japan” 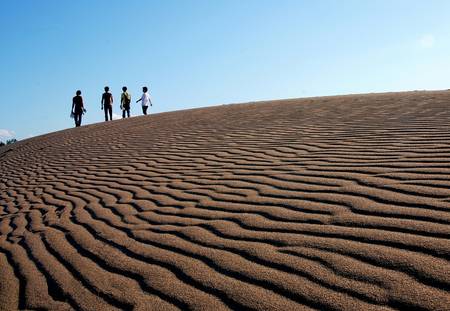 The San'in Kaigan UNESCO Global Geopark is located in the west of Japan and stretches from the eastern Kyogamisaki Cape, Kyoto to the western Hakuto Kaigan Coast, Tottori.

The San’in Kaigan UNESCO Global Geopark is home to a diversity of geological sites related to the formation of the Sea of Japan, including granite outcrops formed when Japan was part of the Asian continent (70 million years ago), as well as sedimentary and volcanic rocks accumulated when Japan rifted away from Asia (25 to 15 million years ago) to form the Sea of Japan, a geological process still on-going today. The Genbudo Cave, one of the major geosites, is internationally known as the place where the term of Quaternary geomagnetic reversal polarity was first proposed with basalt. It also contains geographical features, such as ria type coasts, sand dunes, sand-bars, volcanoes and valleys. This all explains the formation process of the present-day geological setting and landscape.

Thanks to such diversity, the Geopark is home to rare plants like Pseudolysimachion ornatum and Ranunculus nipponicus, as well as Ciconia boyciana (Oriental White Storks) - a symbol of biodiversity. Conservation efforts of the local storks that were once extinct, have been successful in reintroducing them back into the wild through breeding programs and ecosystems development such as pesticide-free farming.

It covers three cities, towns and prefectures with a population of about 400,000. As the region has experienced three large earthquakes, there are disaster-related geosites as well, such as reconstruction heritage sites and fault displacement, which serve as disaster education material. In addition, local hot springs have long been appreciated as people’s health resorts. The region also has many historical sites, such as tumuli and ruins that show the prosperity of the area from the maritime trade on the Sea of Japan, and evidence that the ria type coasts were once used as ports for Kitamaebune ships.

Various landscapes and bio-resources are protected not only by laws or ordinances, but also by the activities of ordinary citizens. Local natural, historical and cultural resources are utilized as hands-on learning material at schools and as disaster-management education. Promotion activities are conducted mainly by the San’in Kaigan UNESCO Global Geopark Promotion Council, including citizens’ exchange meetings at core facilities and local community centers in the Geopark and guide training programs. The goal of these activities is to inspire local citizens so that they can proudly introduce the Geopark to visitors.