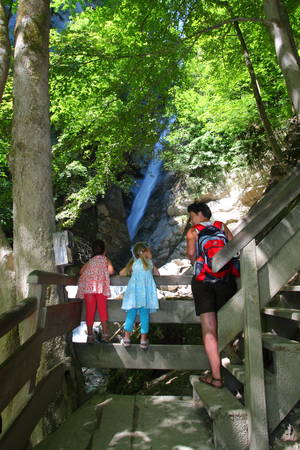 After the rising of the Alps, the Quaternary Period began 2.6 Million years ago. This time was characterized by the glaciations, which covered large part of the Alps as well as nearly the whole area of the Ore of the Alps UNESCO Global Geopark. The ice-stream during the last glaciation (ca. 100,000 years ago) was especially responsible for forming the present landscape. During the last ice age the UNESCO Global Geopark area was covered by the Salzach glacier. Only peaks and ridges above 2000 m a.s.l. were free of ice. This means that the whole slate mountains were ice covered, also the highest of them, the Hochgründeck with 1827 m. This is the reason why they look like rounded hills, similar to mountains in the Alpine foreland. The only mountain range, which overtopped the ice surface, was the Hochkönig with 2941 m altitude. It showed a big plateau glacier, where the last remnants still exist today. From the base of the overdeepened valley of the Salzach, some 100 m below current level, up to the summit of Hochkönig, the vertical dimension of the ice cover was app. 1500 m. The catchment area of the Salzach glacier was the northern ramp of the Hohe Tauern with mountains higher than 3000 m.

Around 19,000 years ago the temperature started to increase. This was the onset of the melting period of Alpine glaciers. At 15,500 years ago, the climate reached nearly current conditions. The valley regions of the UNESCO Global Geopark were resettled by higher plants - pine forests could be found at the valley bottom up to an altitude of the terrace of St. Veit at 750 m. With the end of the last glaciation, a new landscape was born. The rivers accumulated material at the bottom of the overdeepened valleys, as well as they undercut the oversteepened slopes. Mass movements like debris flows, slides and rock falls happened. The best examples of these morphological activities are the slopes of Fritztal, which are mainly composed of till. The instability of the slopes lasts until today. These ice-age “earth pillars” can be found in the UNESCO Global Geopark area near Hüttau.

Since 10,000 years ago, the Alps and also the UNESCO Global Geopark area were characterized by glaciers which were comparable to today. The largely stable, warm temperate climate, the existence of vegetation and wildlife as well as a lower risk of natural hazards was responsible for the first people settling in the mountain regions, such as in the UNESCO Global Geopark area. Another important reason for them has been the extremely valuable mineral resources.

The Ore of the Alps UNESCO Global Geopark characterizes the region of Pongau in the Province of Salzburg. The copper ore of the Mitterberg - Mühlbach region was mined since prehistoric times. The so called “Tauerngold” (gold of the high mountain range “Hohe Tauern”) of the Gastein valley was the most important mineral resource of the Middle Ages. The iron ore of Flachau / Wagrain region had a national significance. Nowadays mining is history, but the local people are historically closely connected to geological natural resources.

The visitor centre in Bischofshofen gives an outstanding overview of the area where the guests can receive further advice about activities and can admire a spectacular special exhibition. The fascinating copper trail connects the visitor centre, museums and show mines of the UNESCO Global Geopark villages. Visitors pass traces of ancient mining activities as well as interesting geological outcrops, breathtaking waterfalls, steep walls or deeply eroded creeks. Sustainable tourism development within the UNESCO Global Geopark raises also awareness for nature in general and geosciences, in particular through education as well as environmental programs like a programme on “urban mining”.