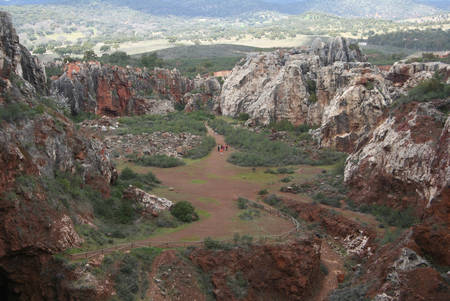 The Sierra Norte de Sevilla UNESCO Global Geopark is located in the central region of western Sierra Morena, a mountain range in southern Spain, which separates the Central Plateau and the Andalusia Depression. The Geopark is situated in the north of Seville province, respectively flanked, to the west by the “Sierra de Aracena y Picos de Aroche” Natural Park, and to the east by “Hornachuelos” Natural Park.

The UNESCO Global Geopark is located mainly in the geological zone of Ossa-Morena, and less in the Sudportuguese Zone (in the western part), of the Iberian Massif, a part of the Variscan (or Hercynian) orogenic belt. All rocks are marine sedimentary deposits, generaly slightly metamorphosed, of the ages between Upper Precambrian to Paleozoic. There are several batholiths of igneous rocks, emplaced during the Variscan orogeny or later, that have generated the typical landscapes of craglands. Over the Variscan mountains there are in some points, sub-horizontal sediments related to the Upper Carboniferous, Permian and Triassic ages that represent the fill of continental post-orogenic basins (Alanís - San Nicolás del Puerto and Viar). The location and structure of these basins was also controlled by the main Variscan structures. In some depressions and river valleys there are some Quaternary deposits.

The Geopark’s rich geological, archaeological and mining history has resulted in the recognition of at least 32 sites of geological interest including:

The Sierra Norte de Sevilla UNESCO Global Geopark is one of the largest natural parks in Andalusia and includes, either totally or partially, ten municipalities that are home to more than 35,000 inhabitants.

Next to its many geological and natural sites, the Geopark is also rich in archaeological sites: dolmens used as burial places, castles, buildings and churches, as well as numerous settlements and cemeteries from Roman times.

The Sierra Norte de Sevilla UNESCO Global Geopark is strongly committed to environmental education, largely due to its 25-year history as a natural park. It’s a normal place for educational activities on the themes of geology, ecology, conservation strategies, preservation of knowledge on local traditions and historical-cultural values. Several of its most significant places are annually visited by thousands of students from schools in the region and Spain. The Sierra Norte de Sevilla Natural Park has an Environmental Education Plan, approved by Governing Board, and there are several educational centres carrying out the activities of the Environmental Education Programme ("Aldea"), sponsored by the Departments of the Environment and Education and Science of the Andalusian Regional Government. In the UNESCO Global Geopark there are several facilities prepared for education: El Robledo Visitor Centre, El Robledo Botanical Garden, Cortijo Berrocal Visitor Centre, Cerro del Hierro Information Point and the UNESCO Global Geoparks network of paths and viewpoints.