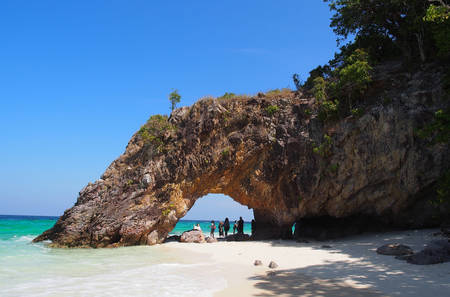 Satun UNESCO Global Geopark is located exclusively in the Satun province of southern Thailand. The Geopark covers four districts (i.e. Thungwa, La-ngu, Manang, and part of Mueang Satun) including two national parks and one wildlife sanctuary. Altitudes reach up to 732 m and temperatures range between 23°C and 34°C. Mountains and foothills characterize the eastern and northern areas, while beaches and coastal islands dominate the Andaman Sea part of the Geopark.

Famously referred to as the ‘Land of Palaeozoic fossils’, the area is renowned, in both Thailand and the whole of Southeast Asia, for its abundance and high diversity of fossil species as well as for the oldest succession of fossils including trilobites, brachiopods, stromatolites, conodonts, graptolites, tentaculites and nautiloids. The Cambrian trilobite fossils of Tarutao Island are the oldest in the Thai-Malay Peninsula and the volcanic ash layers allow for absolute dating of the late Cambrian trilobite biostratigraphy. One new genus and five species of Cambrian trilobites were discovered here, as well as the fascinating red stromatolites. A significant amount of evidence in the area supports the evolution theory of the Old-World Realm in which Shan-Thai formed as a part of peri-Gondwana terranes. Prasat Hin Panyod is probably the most important geosite of the Geopark. The outstanding geological features of this site are characterised by a spectacular pinnacle karst landscape, including a stunning sea cave and hidden lagoon, which tourist can visit by kayak.

The area of Satun UNESCO Global Geopark has a population of about 113,110 inhabitants of mainly Thai origin. It is known as a peaceful place with renowned natural beauty, where several cultures and religious groups, Buddhist, Muslim and Christian, as well as minority groups, i.e. Semung or Maniq and Urak Lawoi, live together in harmony. Economic activities are primarily based on agriculture, fishery, tourism, and small local businesses. The Geopark supports strong collaboration and networking between local people, communities and governments, especially concerning geo-conservation, geo-tourism and education, the latter of which has received particular attention since the discovery of abundant fossil records in 2007.

Satun Province is known for its rich intangible culture heritage. Local traditions include the Pe-Bo tradition of praying to ghosts and the ‘Loi Rue’ or boat floating tradition of the Urak Lawoi people. Important tangible cultural heritage sites include Tarutao Island and the ancient town of Su-Ngai U-Pe.

The UNESCO Global Geopark promotes the sale of local products from communities through different activities, such as the Satun Fossil Festival and other related fairs. Geotourism offers many advantages to both the local community and the sites themselves. By generating job opportunities and new income streams and providing funds for the protection of the geosites and upgrading of facilities, the quality of life for local people has improved significantly. Besides its socio-economic importance, geotourism practiced both sustainably and ethically in this area, also improves levels of appreciation, understanding and respect for the surroundings, which in turn may lead to the protection and conservation of geo-, bio- and cultural diversity.