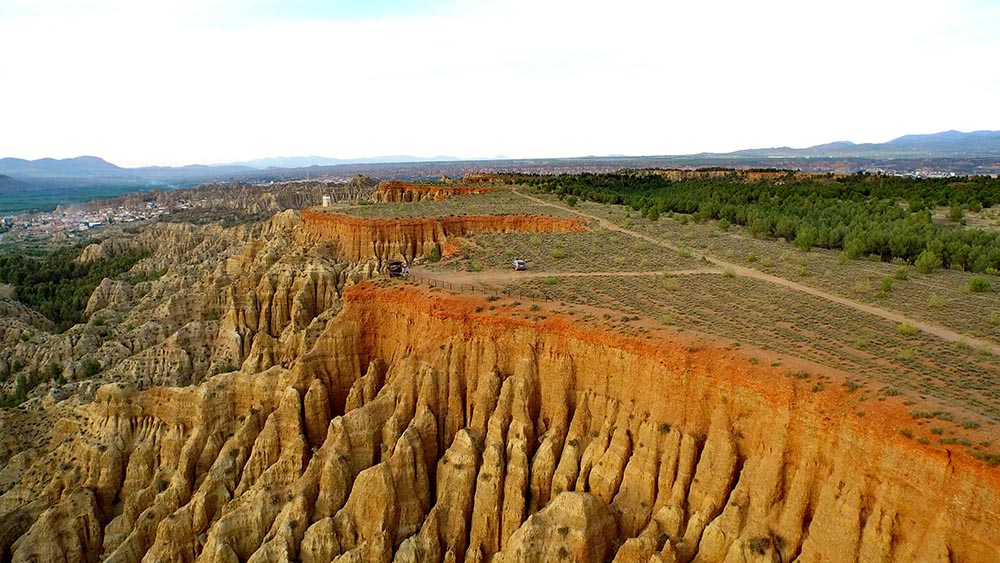 The geopark correspond with the valleys created by river erosion during the last half million years, as well as a large part of the Guadix-Baza basin and part of the mountains that enclose it. This all coincides with the administrative limits of the districts of Guadix, Baza and Huéscar (with the exception of their natural and national parks). The valleys in the north of Granada, the main protagonists of our Geopark, and which currently drain the territory towards the Atlantic Ocean, have been created by the fluvial erosion of the last half a million years. Between approximately 5 million years ago and 0.5 million years ago, this territory was without any drainage exit to the sea, which generated an extraordinary record of continental Quaternary continental sediments. The following Exorheic period has configured its current geomorphology, characterised by an impressively eroded landscape. The arid nature of the region’s weather, with scarce vegetation on the valley slopes, favours observation of one of Continental Europe's best Quaternary records. These valleys with their spectacular Badlands expose the most wide-ranging and longest-lasting group of paleontological deposits of Continental European quaternary vertebrates. In particular, large vertebrate deposits have been discovered in Early Pleistocene sediments, with more than 150 sites identified. The Granada Geopark also tell us about the history thanks to the messages left in rocks from the Mesozoic and Tertiary stages. It also allows observation of more recent geological deformations of the Betic Range, such as active faults. These faults were responsible for ancient earthquakes which generated singular structures called seismites during the Quaternary stage. Those structures are among the best examples known in the world. The Geopark is a perfect complement to the current group of Iberian Geoparks and will contribute in a geological, geomorphological and Palaentological Quaternary context to the European network for the first time. The park enables conservation and exploration of an exceptional Quaternary record, in a territory with some of the most minimal anthropological alteration in Continental Europe.

The Granada Geopark is located in the south-west of Spain, specifically in the north of the province of Granada. This candidacy has a total area of 4722 km2, which is surrounded by some of the highest mountains of the Iberian Peninsula. 25 % of the surface area of  the territory is occupied by badlands. The current biodiversity is strongly conditioned by both the semi-arid and continental nature of its climate and by historical processes and geographical factors. This has favoured the development of a very rich biota including numerous  species that are exclusive or almost exclusive to the Geopark. The climate is continental with hot summers, very cold winters, and semi-arid conditions with 250-350 mm/year rainfall. The proposed area is accessible by different modes of transport (plane, train, bus and car). The nearest cities are Granada (65 km), Murcia (120km) and Malaga (185 km) that they are connected by national and international flights.The Granada Geopark involves the participation of 47 villages with a population of 100.611 inhabitants. It is a fundamentally rural area – 93 % of the population live in areas with less than 50 inhabitants per square kilometre - with population centres huddled in the spectacular steppe-like and arid landscape of the north of Granada. The economic sectors of greatest importance to the territory are agriculture and livestock  farming, commercial activity and tourism. The promotion of heritage and natural resources also stand out as emerging economic sectors.