“The Geopark is multicultural, which involves Taoism, Buddhism and Confucianism. It is where Cliff Grave culture and Taoism originated” 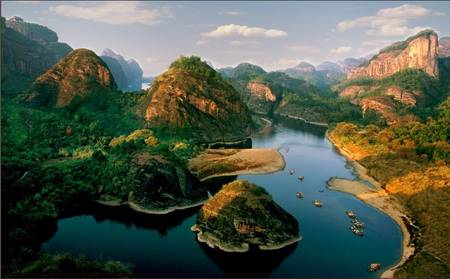 Longhushan UNESCO Global Geopark features Danxia landforms as well as volcanic landforms and tectonic landforms. The UNESCO Global Geopark boasts typical late mature stage Danxia landforms, with a full display of a complete development series of young-stage, mature stage, and old-stage Danxia landforms. The Danxia landform in the Geopark is a type example of geomorphologic processes from Earth’s past evolution, mainly presented as isolated peaks, peak clusters and monad-nocks. The geologic vestiges in the Geopark record abundant information about the Earth’s evolution since the Cretaceous (~145 million years ago), revealing important geological events such as deposition of red beds followed by erosion and tectonic processes that created some of the most intricately sculpted rocks in the world.

The landscapes of the UNESCO Global Geopark are abundant in numbers, unique in forms, and exotic in scenery. Green water harmoniously surrounds and reflects the red cliffs.

The Geopark is also the hibernacula of Chinese mergansers that are an endangered species.

There are abundant heritages found in the UNESCO Global Geopark including Danxia landforms, Taoist culture, ancient Cliff Coffin Burying Customs, and Buddhist culture. The historical human relics including cliff tombs, where Taoism and Buddhism have blended with the outstanding natural beauty in a unique manner, gave rise to the harmonious coexistence of humans and nature. Together, all of these compose a distinctive integrated UNESCO Global Geopark with abundant contents, featuring the diversities of geology, geomorphology, ecology and cultural interest. This constitutes a natural landscape system bearing an excellent scientific and humanistic value.

The establishment of the Longhushan UNESCO Global Geopark and its museum enable visitors to see and learn about the unique geological scientific content, excellent ecological environment, rich cultural sites, and the importance of protecting this precious masterpiece of natural heritage.