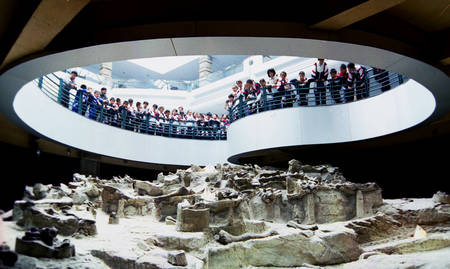 Zigong UNESCO Global Geopark lies in Zigong City, Sichuan Province, China, in the Asia-Pacific region. Zigong UNESCO Global Geopark belongs to the Ziliujing Depression of the Sichuan syncline on the Yangtze Platform. It connects with the southern margin of the Weiyuan-Longnvsi uplift in the north, the southern Sichuan lower folded zone in the southeast and the Liangshan folded zone in the southwest.

The geoheritage in Zigong UNESCO Global Geopark is dominated by the extremely abundant dinosaur fossils and other vertebrate fossils, a typical Jurassic section and natural and cultural heritage related to salt production. Most of this geoheritage is of national and international significance for scientific research. The widely distributed Jurassic terrestrial strata in the UNESCO Global Geopark yield a great amount of dinosaur and other vertebrate fossils, commonly forming large-scale taphonomic assemblages. Zigong UNESCO Global Geopark is rich in salt mines, with a production history of about two thousand years. A variety of the salt industry remains have been well preserved.

The main protected objects of Zigong UNESCO Global Geopark are the Dashanpu Dinosaur Fossil Fauna, the salt well geology and remnants of the related industry, as well as the other precious natural resources and cultural and historic relics. During the history of the salt well industry, the people of Zigong created ten important innovations, which are of great value for salt exploration, drilling technology, salt mine formation and distribution.