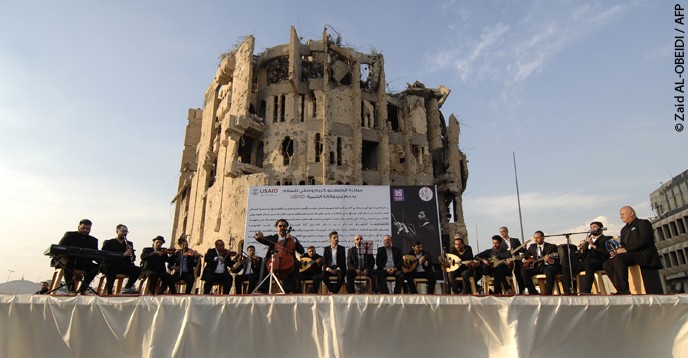 In February 2018, UNESCO launched the “Revive the Spirit of Mosul” initiative at the International Conference for the Reconstruction of Iraq in Kuwait. It brought the international community together under its aegis, to participate in the reconstruction of this city, which has been decimated by war, looting and destruction. This reconstruction must be part of Mosul’s history – a plural history, at the crossroads of the cultures and religions of the Middle East.

Mosul has seen its heritage ransacked, its identity bruised, at the hands of ISIL. The destruction targeted places of worship (mosques and churches), the shrine of Nabi Yunus and the Assyrian and Parthian statues and frescoes of the Mosul Museum. The city’s library, with its several thousand ancient texts, was deliberately set aflame. Antiquities were trafficked.

The ISIL occupation completely devastated Iraq's education system, from pre-primary to higher education. When subjects such as history or the arts were replaced with content designed to incite hate, the vast majority of families decided to take their children out of school. Those who remained were subjected to systematic indoctrination, mainly by teachers who were forced to relay the group’s extremist ideology.

Considering these observations, it is not just the cultural heritage that needs to be restored, but also dignity and memory. UNESCO therefore decided to mobilize the international community, to propose an initiative that would combine heritage, culture and education. It is being deployed in collaboration with the Government of Iraq, along these three lines, and involves multiple actors – neighbouring countries, international organizations and the European Union (EU). The initiative aims to give a new perspective, a new impetus, to Mosul.

In addition to the restoration of monuments and the rehabilitation of Mosul’s historic urban fabric, a project to rebuild houses in the old city (Mosul and Basra), and to train cultural heritage professionals, will be implemented with the support of the EU. This is based on a participatory approach that focuses on skills development and job creation to promote social cohesion and community reconciliation.

Along the same lines, the inventory of religious sites damaged by ISIL has resulted in a publication that will serve as a support for interfaith dialogue workshops, permitting the  recreation of links between communities. An emergency plan for the safeguarding of intangible heritage in danger and the creation of “cultural mobile spaces” for displaced persons and host communities is being prepared.

At the same time, the Iraqi government has called on UNESCO to develop a national education strategy for the period 2020-2030, in order to rebuild the foundations of an education system that meets the needs of its population. Simultaneously, educational projects are being implemented with the purpose of preventing the resurgence of extremism and recreating the conditions for living together.

Two projects will aim to ensure that the primary schools in the Old City of Mosul are safe places where students can flourish, learn and interact with others with respect, thus contributing to tolerance and peaceful coexistence in the long term.

These projects, supported by Japan and the Netherlands, are based on a holistic approach that involves children, but also teachers, communities, parents and educational staff in the prevention of extremism. The upgrading of higher education will also be a key action in rebuilding the country and its system of production. Beyond a purely economic approach, it is a matter of enabling institutions such as Mosul’s university library to once again become the cultural and intellectual epicentres they used to be.

These different projects pursue the same goals: to protect, rebuild and educate. Because culture and education are the only long-term responses against the violence of extremism and its destructiveness. This approach is aligned with the vision of the Iraqi government, as it is up to the Iraqi authorities to conduct this initiative locally, while UNESCO continues its coordinating role.

Assistant Directors-General for Education and for Culture, UNESCO.