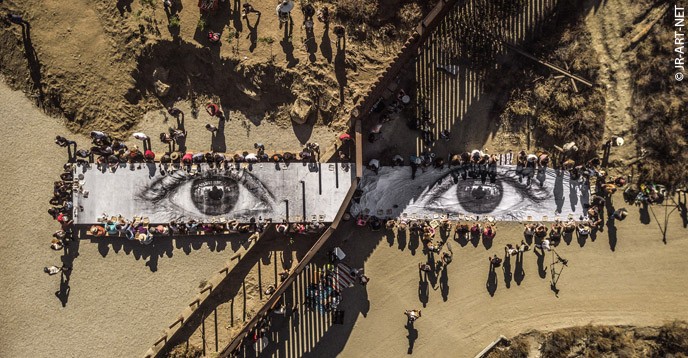 Giant picnic organized at the United States-Mexico border in 2017, by French artist JR.

A recent survey – covering over a hundred mayors in the United States – illustrates that a lot depends on whether these officials are willing to demand equal rights for their newest entrants, and to affect change in the face of a more stringent federal immigration policy.

In June 2018, a bipartisan delegation of mayors – including the president of the United States Conference of Mayors, Steve Benjamin – travelled to Tornillo, Texas, to protest the family separation policy of President Trump’s administration. America’s mayors have also stretched across party lines, in April 2017, to call for immigration reform and to protest the proposed expansion of  public charge rules in October 2018, which penalized “lower-income immigrant families by denying them visas and green cards because they have received vital non-cash benefits to which they are legally entitled.” This bipartisan action contrasts sharply with the rancorous partisan polarization that defines the current national political conversations surrounding immigration.

Yet, in spite of this mayoral public activism, there are many obstacles to locally-driven immigration reform. Indeed, these public actions belie stark internal divisions among American mayors. In the 2017 and 2018 Menino Survey of Mayors, our team at Boston University's Initiative on Cities asked over a hundred mayors of cities – with populations of over 75,000 – their views on immigration, race, and racism, among other issues. In contrast with the partisan unity adopted by the US Conference of Mayors, mayors appear to be sharply divided on these issues. Eighty-six per cent of Democratic mayors believe that immigrants should receive local government services, regardless of their legal status, in contrast to a mere twenty-nine per cent of Republicans.

What’s more, even those mayors who do support fighting the Trump administration’s immigration policies are not quite sure about their capacity to do so. Only thirty-one per cent of mayors believed that they could do a lot to counteract or oppose federal immigration policy. In comparison, when it came to federal policing initiatives, seventy-four per cent felt they could do a lot to countermand or revoke them. These disparities make sense. While many American public policies have been devolved to the state and local levels, immigration firmly remains in federal hands.

State laws may further limit the policy autonomy of cities in this arena. Multiple states are considering legislation prohibiting sanctuary cities*, though some, notably, are pursuing policies that explicitly permit sanctuary jurisdictions. In Texas – a state that has been demographically transformed in recent decades by immigration – the governor signed a state law banning sanctuary cities; the law made police officials and local leaders subject to misdemeanour charges if they failed to honour requests from immigration agents to hold non-citizen inmates who are subject to deportation.

Moreover, even in those American cities where the state governments are more permissive, cities face important constraints. They are often cash-strapped, and limited from raising additional resources by onerous tax and expenditure limits imposed by their state governments.

That said, there remain many local policies at the disposal of mayors that could appreciably affect conditions on the ground for immigrants – perhaps most notably in the realm of policing. Local governments can opt, in many states, not to enforce some aspects of national immigration law – becoming “sanctuary cities.” As the US Conference of Mayors noted in a statement issued on 25 January 2017: “Local police departments work hard to build and preserve trust with all of the communities they serve, including immigrant communities. Immigrants residing in our cities must be able to trust the police and all of city government.”

Mayors and cities might also promulgate policies promoting equal access to quality local government services across immigrant and non-immigrant communities. America’s cities are highly segregated, with white people and people of colour – those of African descent, Asians and Hispanics – starkly separated into different neighbourhoods. In Boston, for example, sixty per cent of Hispanics would need to move from their current neighbourhood of residence in order to be evenly spread across the metropolitan area.

This racial and ethnic segregation leads to concentrated poverty – in which socio-economic deprivation is clustered in one place. Concentrated poverty is associated with a whole host of negative social and economic outcomes, including fewer job opportunities and higher crime. These areas, on average, have lower-quality government services.

What’s more, many mayors are reluctant to acknowledge local discrimination and inequities in public services. Only nineteen per cent of mayors believed that immigrants faced a lot of discrimination in their cities. Over eighty per cent of mayors of both political parties viewed the quality of their mass transit, street maintenance, and parks as equal for white people and people of colour. Acknowledging inequality and discrimination are key prerequisites to taking concrete policy actions that tackle these issues.

This is not to say that all mayors eschew acknowledging and addressing racial inequality. Here, again – as with views on immigrants receiving public services – the partisan divide was substantial. Democratic mayors were twenty percentage points more likely than Republicans to perceive discrimination against immigrants in their cities. Depending upon the policy area, Democrats were between twenty and fifty percentage points more apt than Republicans to believe that access to social and public goods like jobs, health care, and fair treatment by the courts was better for white people than for people of colour. While mayors across party lines have taken symbolic action against Trump’s immigration policies, Democratic mayors are substantially more likely to provide vocal support for undocumented immigrants, acknowledge local discrimination against immigrants, and admit that access to key public, social, and economic goods are racially unequal.

Immigrants thus face an uneven patchwork of services to navigate, as some (largely Democratic) local governments aggressively promulgate initiatives to welcome immigrants and redress disparities, and others – due to limitations or local prejudices against newcomers – choose not to.

* Sanctuary cities are those that are committed to protecting the rights of all its citizens, including undocumented immigrants, and providing basic services to them. In the US, these cities also ensure that undocumented immigrants who are not otherwise engaged in criminal activity are prevented from being detained or deported by the federal authorities.

Assistant professor of political science at Boston University, Katherine Levine Einstein  received her Ph.D. in Government and Social Policy from Harvard University. Her work on local politics and policy, racial and ethnic politics, and American public policy has appeared in multiple academic journals.