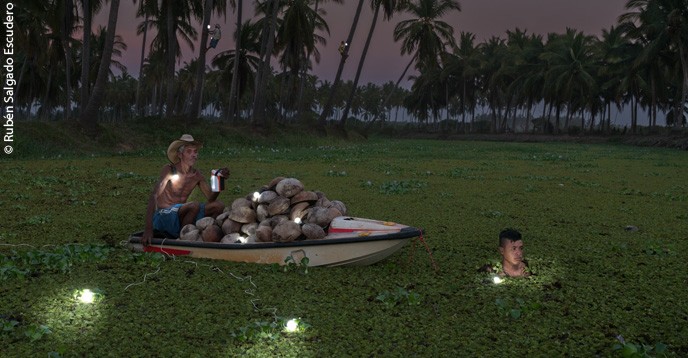 Cristóbal Céspedes Lorenzo and his young associate, Francisco Manzanares Cagua, carry freshly-picked coconuts across the river to Copala, Mexico, which they will sell to a company which makes coconut butter and oil.

“Do I even have a right to be here?” On more than one occasion, Rubén Salgado Escudero asked himself this question as he travelled through rural Myanmar with his expensive photographic equipment. The Spanish photographer, who visited this country in 2014 on behalf of a humanitarian organization, was amazed by the glaring lack of access to electricity. “Most of the villages I went to, didn’t have electricity,” he explains.

Out of more than 53 million people in Myanmar, 22 million are deprived of this commodity, which until now had been so commonplace in his eyes. While seventy-nine per cent of urban dwellers are supplied with power, this rate drops dramatically in rural areas – where only forty-three per cent of the population can light their homes at nightfall.

Once his mission was completed, Salgado continued on his path as a freelance photographer. He decided that he would earn the right to be there. He didn’t know how yet, but he wanted to draw attention to the problem. The idea of Solar Portraits came to mind when he met villagers equipped with solar panels. “The quality of life of these people was so vastly different from everyone else’s around them,” he recalls.

Energy is indeed “essential for humanity to develop and thrive”, as highlighted in the 2017 Report of the International Energy Agency (IEA). It is essential for the achievement of many of the Sustainable Development Goals (SDGs) set out by the United Nations in its 2030 Sustainable Development Agenda, which includes poverty eradication (SDG1), universal access to quality education (SDG4) and gender equality (SDG5). Clean and affordable energy for all is, in itself,  one of these objectives (SDG7). This is the first time that the fundamental role of energy has been recognized on this scale, according to the report.

Yet, “having access to electricity is still a privilege in many countries and not a right,” the photographer says indignantly. In 2017, there were nearly one billion people in the world without electricity. But how do we attract the attention of the public, who are increasingly jaded by the negative news that reaches them every day? “By finding new creative ways to tell stories, to capture people’s attention,” Salgado responds.

He takes his photos with only the light of LED bulbs powered by solar panels. This light, which gives them an air of Rembrandt portraits – and undoubtedly the positive energy that emanates from it – aroused an interest that the photographer did not anticipate. Published in Time, the American weekly, and the German monthly, GEO, the Myanmar portraits were enthusiastically received by the public. So much so that the photographer, with the help of an Austrian reader, launched a crowdfunding campaign, Let there be light Myanmar. The funds collected were used to equip three villages with solar panels in 2016, benefiting 400 inhabitants.

Since then, the project has continued to expand. The novice photographer was noticed by the American magazine National Geographic, which sent him to Uganda in sub-Saharan Africa in 2015, to complete the series. It is estimated that by 2030, this region will be home to 600 million of the world's 674 million people living without electricity.

In the same year, Salgado visited India, which is currently performing one of the greatest feats in the history of electrification. Half a billion Indians have been connected to the power grid since 2000, giving the country hope that it will reach its goal of universal access to electricity by the early 2020s.

In 2017, the photographer travelled all over Mexico. In 2019, he plans to visit the Navajo in New Mexico (United States), Guatemala, Colombia and the Philippines.

Nowadays, Salgado organizes workshops in the schools of each community he encounters in the course of his work. Through practical experiments with solar bulbs, students are introduced to the concept of renewable energy, which is, according to the IEA, the cheapest solution for three-quarters of the new connections needed in the world. “The sooner we can make children conscious of the importance of this issue, the more leaders we will have in future who will care, and take us in the right direction,” he explains.

This photo essay is being published to mark the International Day of Light, celebrated on 16 May. 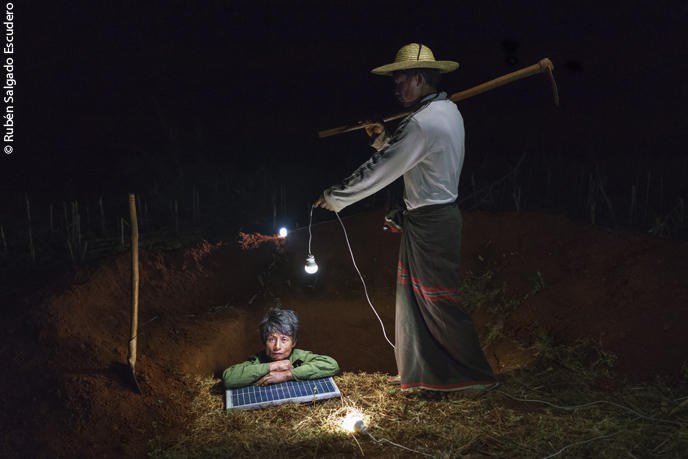 Digging a household latrine in Kayah state, Myanmar. In South-East Asia, 65 million people live without electricity, ninety-five per cent of them in four countries – Cambodia, Indonesia, Myanmar and the Philippines. 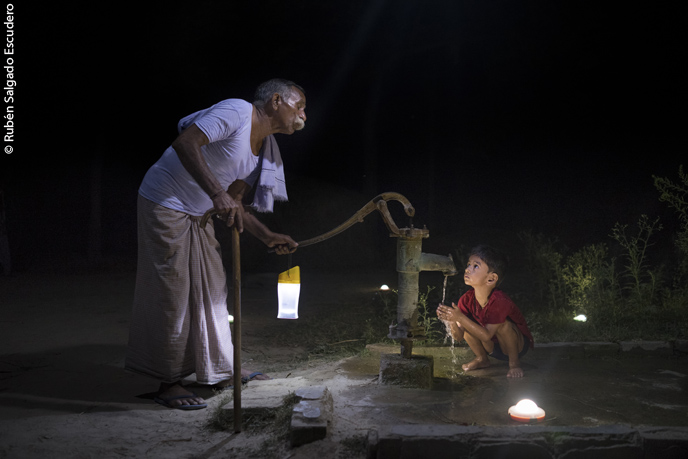 Guru Deen Shukla pumps water for his grandson outside his home in India, 2015. Delivering on a high-priority commitment, the Indian government completed the electrification of all villages in early 2018. 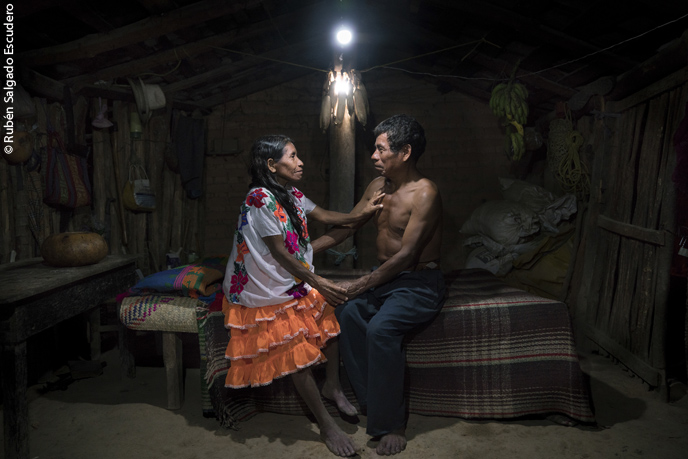 Faustina Flores Carranza and Juan Astudillo Jesús in their home in Guerrero, Mexico, recently lit by solar energy. This is the first time the couple, married forty-eight years, have been able to look into each others’ eyes after dark. 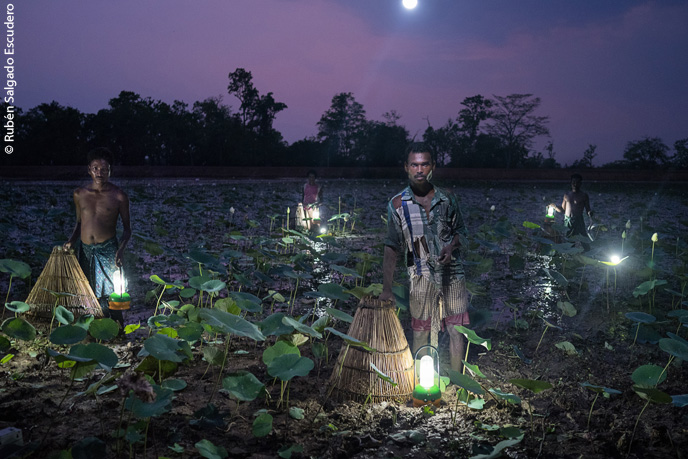 In India’s Odisha state, villagers trap fish using cone-shaped baskets and solar lighting. According to the government, 9.6 million households in the state have electricity. 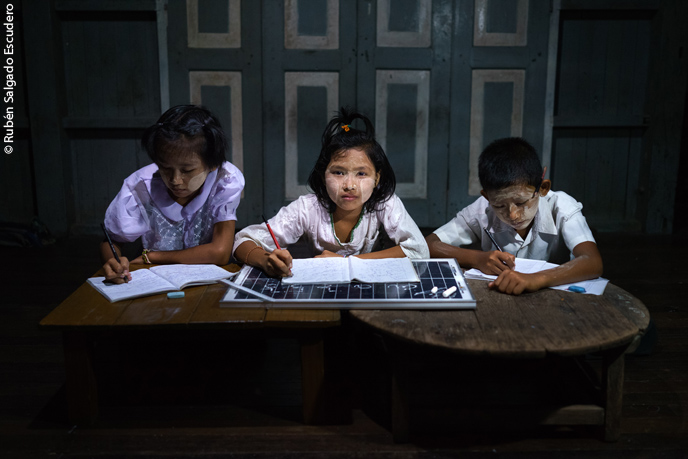 Students do their homework in a solar-powered after-school community centre in Yangon, Myanmar. Studies have shown the pivotal role of electricity in promoting literacy and improving the quality of education. In 2017, only twenty-seven per cent of schools in the country had electricity. 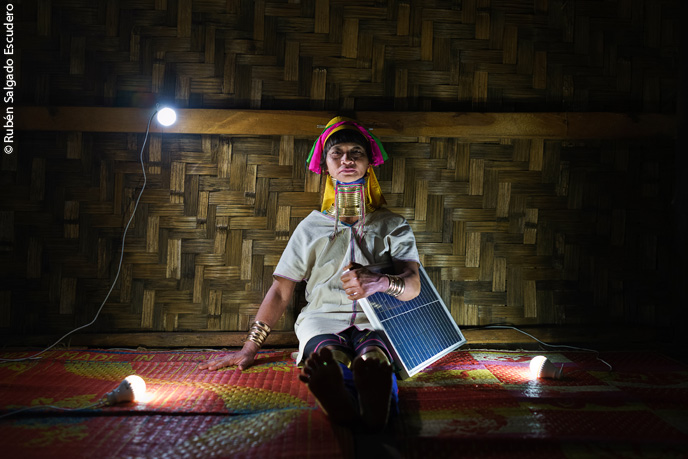 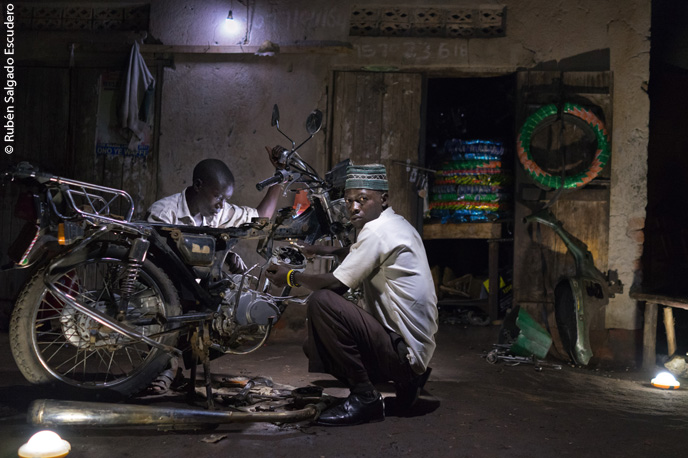 Thanks to solar energy, Ugandan mechanics Ibrahim Kalungi and Godfrey Mteza can work longer hours and earn more money. The electrification rate in sub-Saharan Africa is currently forty-three per cent. 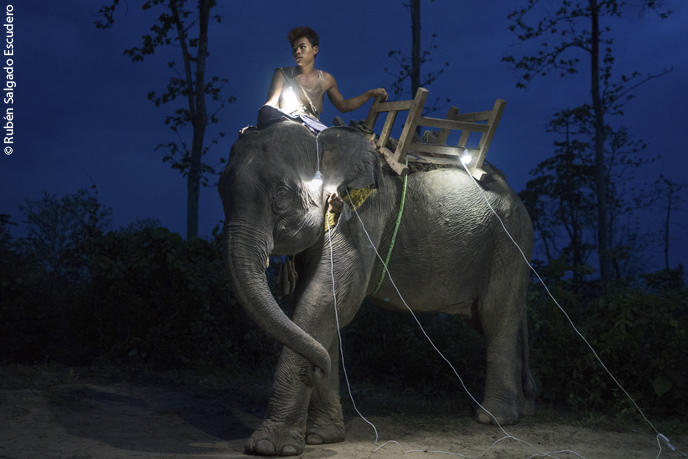 Too Lei, an oozie or elephant handler, poses on his elephant in Myanmar’s Bago region. For 300 years, oozies have worked with elephants to ensure sustainable logging.

An innovative photovoltaic film to aid education in Togo

On 21 February 2019, a cargo ship left the port of Saint-Nazaire, France. On board: sixty-five kits, which included portable rechargeable LED lamps and solar chargers in the form of pouches. These pouches are equipped with a flexible, ultra-thin and organic photovoltaic film, with minimal environmental impact. The shipper: ARMOR, a French company which developed this innovative photovoltaic technology in 2016. Its target audience: 212 students from Agou Akplolo, a non-electrified village north of Lomé, Togo. Only thirty-five per cent of the 7.7 million inhabitants in this sub-Saharan country have access to electricity. The project is the result of a partnership that UNESCO signed with ARMOR in December 2018. Its objective is to provide light for children, so they can study after sunset.