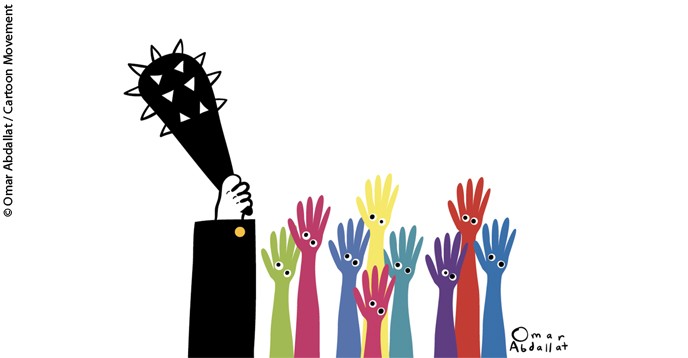 Human rights are no longer a theoretical horizon for humanity, but an immediate, concrete aspiration of all the world’s peoples. The relativist theory that non-Western societies do not recognize themselves in philosophies based on the rights of the individual is outdated, argue the French-Egyptian writers Bahgat Elnadi and Adel Rifaat, who write under the pen name Mahmoud Hussein.

Does the philosophy of human rights, which has historically reflected the liberal political vision of Europe’s Enlightenment movement, only reflect the legal requirements of Western societies? This idea represents the relativist theory, which considers that non-Western societies recognize themselves in other legal philosophies – where the rights of the community, religion, custom and ethnicity prevail over the rights of the individual – and that there is, therefore, no reason to make human rights a universal requirement, applicable to all societies.

For most of the last century, this was a legitimate argument for those who defended the right to self-determination for the colonized, to hold against the Western powers. In this context, universal values ​​were indeed distorted to justify the so-called “civilizing mission” of colonial metropolises. In contrast to such a deviation, the traditional values specific to ​​colonized societies were mobilized to gather popular forces, wrest independence, and protect the sovereignty of the new national states. The notion of collective self-determination thus took precedence over the notion of individual self-determination.

But this period is now over. The vast majority of formerly colonized countries have changed their political, social and legal structures. They are no longer governed by foreign nations, but by local bureaucracies. Their societies do not rely solely on the figures of the traditional economy, but also on their modern classes, that are constantly expanding. Community, religious and ethnic solidarity remain more or less important. But it is no longer within the framework of this solidarity that these societies can draw the necessary dynamism to defend and renew themselves, and to flourish in the globalized world of the twenty-first century.

They can do this only by banking on the modern, intellectual and working classes that have developed since independence. These are the students, the writers, the artists, the workers, the civil servants, the lawyers, the doctors, the engineers – each of whom take individual responsibility for their actions – both in the economic and political sphere – who make up the driving forces that will shape the future of these nations.

In most cases, these vital forces are now facing persecution from their own governments. The rulers have constituted new castes, endowed with powers and privileges unknown to traditional societies. They rely on autocratic regimes, which are perpetuated by the most modern means of repression, while appealing to religious, tribal and customary values, ​​to maintain divisions among their peoples and to block the development of new forms of democratic expression.

Therefore, for the vital forces of these peoples, the fundamental values ​​to be defended  are now those are based on the legal equality of all individuals – that protect their aspiration to true citizenship by delegitimizing political arbitrariness; that unite peoples by transcending the age-old discrimination between men and women, between diverse ethnic groups and tribes, and between different religious affiliations. In short, today more than ever, it is human rights values that are on the agenda  – simply because they have actually become universal in practice. They are no longer merely proclaimed by international organizations as a theoretical horizon for humanity, they are effectively claimed by the world’s peoples as an immediate and concrete aspiration.

This article is Mahmoud Hussein’s response to Human Rights and Cultural Perspectives, published in Issue 2018-4: Human Rights: Back to the Future.

The Koran: between text and context, by Mahmoud Hussein, the UNESCO Courier, April-June 2017 (online article).

The Muslim phase of humanism, by Mahmoud Hussein, the UNESCO Courier, October-December 2011 (PDF).

Discover a selection of issues on Human Rights in the UNESCO Courier .