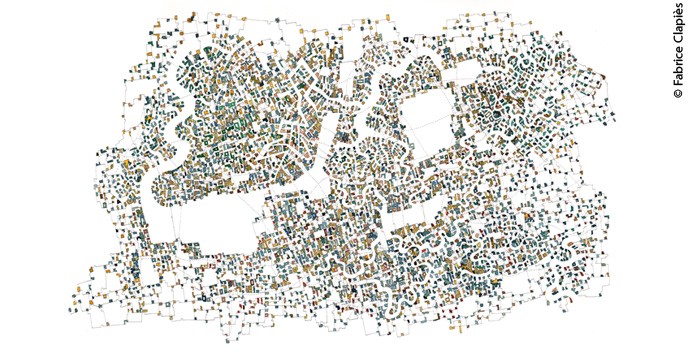 The probability of a city, imaginary urban map by French artist Fabrice Clapiès.

2014 was a watershed year for humanity: for the first time in history, more than half of the world’s population now lives in cities. By current estimates, this will rise to seventy per cent by 2050. These cities of tomorrow will, in many ways, mirror their forbearers; from the early city-states of Mesopotamia, to the Italian cities of the Renaissance, to the megacities of today – cities have historically advanced human development, serving as melting pots for people of diverse backgrounds to exchange and dialogue.

Yet the cities of today and tomorrow are also facing new, unprecedented challenges. Although occupying only two per cent of the world’s landmass, they consume sixty per cent of global energy, release seventy-five per cent of greenhouse gas emissions and produce seventy per cent of global waste. As cities expand, they threaten biodiversity, and place urban infrastructure and resources – from water to transport to electricity – under enormous strain, multiplying the impact of natural disasters and climate change. Unchecked development and mass tourism place cultural heritage sites and living heritage practices at risk. Rising inequality and migration – driven in many cases by conflict and disaster – make cities the focal points for new social cleavages, for exclusion and discrimination.

Given the magnitude of these challenges, cities across the globe have concluded that new ways of thinking, citizen engagement and, crucially, city-to-city cooperation, are the only paths forward. We have seen this at UNESCO, which is home to no less than five city networks, each of which is working to harness the extraordinary capacity for innovation and connection that is a hallmark of cities.

For instance, cities account for seventy per cent of the global economy, including a large portion of the creative economy, which generates annual global revenues of  $2,250 billion and employs more young people than any other sector. That is why the 180 cities that form the UNESCO Creative Cities Network are working to leverage the ability of cities to bring creative people together, to spark economic growth, to foster a sense of community and to preserve urban identities. UNESCO’s Global Network of Learning Cities is working to make cities sustainable by ensuring that all urban residents can benefit from lifelong learning. From learning to ride a bicycle to make the urban environment cleaner, learning to make local products using traditional practices and knowledge or organizing community theatre workshops in marginalized neighbourhoods, each new educational opportunity brings with it the potential for social transformation and development.

As one of the world’s foremost laboratories of ideas, UNESCO is working to bring these networks of cities together, encouraging them to exchange and collaborate on the policies and practices that can respond to the growing needs of urban residents. The Pulitzer-winning journalist, Herb Caen, once said, “A city is not gauged by its length and width, but by the broadness of its vision and the height of its dreams.” UNESCO believes that when cities share these dreams, and take inspiration from the vision of others, they can overcome the challenges of our new urban era.

This issue of the UNESCO Courier is full of stories of creativity, innovation and resilience. I hope they inspire you, and perhaps push you to engage with these issues in your own city or community.