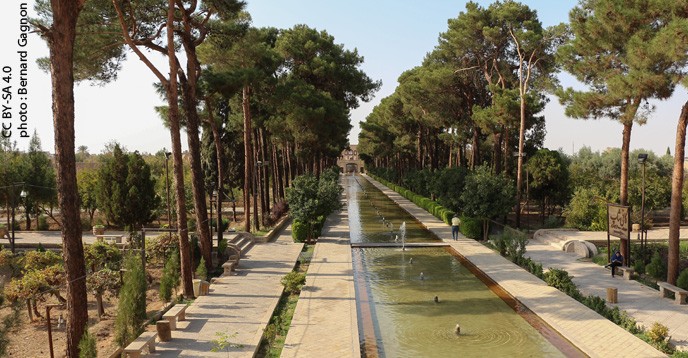 The historical garden of Dolat Abad in Yazd, Iran, with its fountains and ornamental pools.

Modern cities and cultural traditions may be perceived as contradictory notions. Synonymous with modernity, new ways of life and multiple opportunities, we always imagine that cities look to the future. Entrenched in the past, traditions, on the other hand, are thought to obstruct progress. The preservation of heritage is often viewed as costly and time-consuming for a relatively low return on the investment, and is therefore accorded less attention than infrastructure development.

Even so, traditions continue to have a life of their own, and cities would be empty shells without them. These customs are passed on from generation to generation and are constantly evolving – allowing communities to respond to new needs and to adapt to changes in their environment. More than we can imagine, they are able to provide tailor-made solutions to current problems.

The qanats of Iran

In the heart of Iran, for example, the old town of Yazd has greatly benefited from the ingenuity of its inhabitants, who over the centuries, have developed the art and technologies necessary to live in symbiosis with the desert. They have harnessed the harsh nature of their environment to make it a source of artistic creation. This is expressed through their architecture, and especially through innovative urban planning.

Yazd’s elegant earthen architecture has thus been able to withstand the ravages of time and extreme climate, leading the historic city to be listed on the World Heritage List in 2017. In spite of the aridity of the climate, agriculture employs a significant proportion of the inhabitants of the city and the surrounding region. This is mainly due to the preservation of  an infrastructure that dates back a thousand years – the qanats.

The ingenious system of qanats is designed to capture groundwater. Devised in Iran centuries ago, it has been adopted in many parts of the Middle East and the Mediterranean Basin. Gently sloping underground channels, or tunnels, collect water from aquifers with the help of gravity, transferring it downhill for drinking and agricultural purposes. A series of vertical well shafts are drilled at regular intervals along the route, communicating with the surface of the ground. This assists the construction and maintenance of the qanat, providing ventilation and access for workers, equipment and debris. The technology of these underground aqueducts has stood the test of time and is now a model for sustainable groundwater use.

Today, 37,000 qanats are still operational in Iran, supplying eleven per cent of the country's water. They have been used mainly for irrigation since the installation of a water distribution network in 1961. Farmers maintain a sustainable balance between the water flow and cultivated areas by adjusting – depending on their reserves – the water distribution between water-intensive farms and low-consumption orchards. The core concept of the qanats is that  it is up to humans to adjust to available water resources, not the other way around.

Qanats are not just examples of well-preserved ancient infrastructure. The search and control of water are so vital for life in the desert, that considerable efforts have been made by communities to maintain and improve this essential know-how from generation to generation – and to adapt it to current realities. The social fabric has largely been woven around the principles of  sharing, ownership and distribution of water resources. These days, however, an elected qanat council has replaced the traditional public gatherings of the past, to facilitate decision-making processes.

The trade of the moqannis, the well-diggers or geo-hydrological experts who maintain the qanats, has also evolved. In the past, the wide range of skills needed – to find underground water, deciding on the best location for the wells, mastering the techniques of excavation, cleaning and repair of wells and tunnels, and the wisdom of managing the water – were passed down from father to son.

To ensure that this ancestral occupation flourishes, the International Centre on Qanats and Historic Hydraulic Structure (ICQHS), affiliated to UNESCO, and the Faculty of Qanat in Taft, provide education in the field. Located about twenty kilometres south of Yazd, the Taft college has been offering a two-year apprenticeship since 2005. Students are trained by traditional masters in theory and practice, in the Yazd desert. The profession has also received additional recognition – master moqannis can now be licensed by the Ministry of Justice to settle qanat disputes.

Of course, water management in a country with many desert areas such as Iran is extremely complex. In recent decades, new technologies for the exploitation and sharing of water resources have been developed to meet the needs of a growing population and economic imperatives. This modern infrastructure sometimes competes with traditional systems, leading to water shortages in extreme cases.

Nevertheless, the qanats and the resulting know-how remain a pillar of Yazd's urban planning and an integral part of its future projects. This is why institutional management and safeguard mechanisms have been adopted to complement the customary system. Three government agencies oversee qanat management, while the ICQHS carries out research and capacity-building activities.

The cultural backgrounds of inhabitants

Yazd is living proof that intangible cultural heritage can provide or inspire ingenious solutions, adapted to local conditions. By basing their strategies on local practices and making the most of their cultural resources, cities are more likely to mobilize their populations to participate in their development projects. This requires, of course, that living heritage is valued through appropriate safeguarding measures and the active participation of the holders of traditional knowledge.

Cities vibrate and prosper to the rhythm of the activities and exchanges of their inhabitants. Whether they have been settled for a long time or have arrived only recently, they all bring their own cultural backgrounds with them. Their knowledge, beliefs, traditions, customs and worldviews shape their identities and relationships with others – and, consequently, their cities.

What is Intangible Cultural Heritage?

Water-related Centres under the auspices of UNESCO