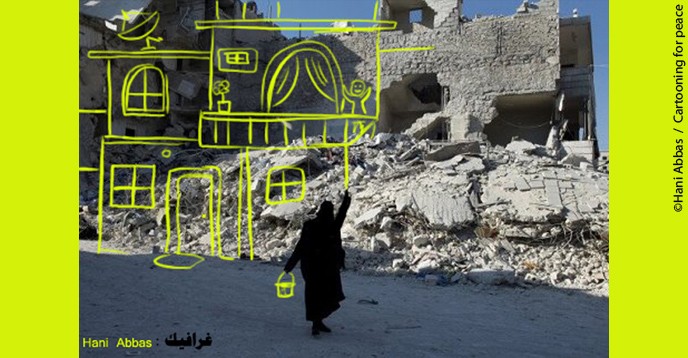 Challenge of mass, Aleppo, Syria 2013, from the collection of Cartooning for Peace, the international network of editorial cartoonists, supported by UNESCO.

The conflict in Syria has caused heavy loss of life and extensive damage to cities and infrastructure, devastating the economic and social life of the Syrian people and their cultural heritage. Once hailed as an example of best practice in urban conservation, the Ancient City of Aleppo, inscribed on UNESCO’s World Heritage List in 1986, was added to the List of World Heritage in Danger in 2013. Heavily affected by the conflict, the city has been reduced to ruins in many places.

Over 500 damaged properties ‒ from the Citadel of Aleppo to markets, museums, places of worship, and other historical buildings ‒ have recently been identified in a study* conducted by UNESCO and the United Nations Institute for Training and Research (UNITAR).

This is the first comprehensive inventory of the material damage and memory loss suffered by this ancient city between 2013 and 2017. The capital of the Amorite kingdom of Yamhad, Aleppo experienced a tremendous boom at the beginning of 2000 BC. It was considered the seat of the storm god, Halab, according to the authors of the book, Ruba Kasmo, a Syrian architect from Aleppo, and Jean-Claude David, a French geographer.

Twenty cultural heritage experts, historians, archaeologists, architects and satellite imagery analysts participated in this project, which began as soon as the shelling of the city stopped in December 2016.

Illustrated with photos of the city and its buildings before and after the conflict began, and providing QR codes with which to access satellite images and 3D documentation, the study offers a solid technical basis for the planning of the restoration and rehabilitation of Aleppo. It reveals that more than ten per cent of Aleppo’s historic buildings have been destroyed and that more than half the buildings assessed showed moderate to severe damage.

But it is not just the stones that have been destroyed. The soul of the city has been shattered. The restoration of memory is as, if not more, important, than reconstructing buildings. The Great Mosque of Aleppo, for example, was a jewel of Seljuk civilization. It was unique not only for its minaret and exceptional decoration, but also for its social role. This place of worship has been a fundamental element of Syrian culture, with generations of Syrians gathering here over the course of nine hundred years. Its devastation strikes at the very essence of this community.

The inhabitants of Aleppo are the custodians of the history and memory of their city. It will be up to them to revive its cultural, social and economic life. The authors have dedicated this book to them, to help them overcome the trauma of war.

* Five Years of Conflict: The State of Cultural Heritage in the Ancient City of Aleppo, published by UNESCO and the United Nations Institute for Training and Research (UNITAR)