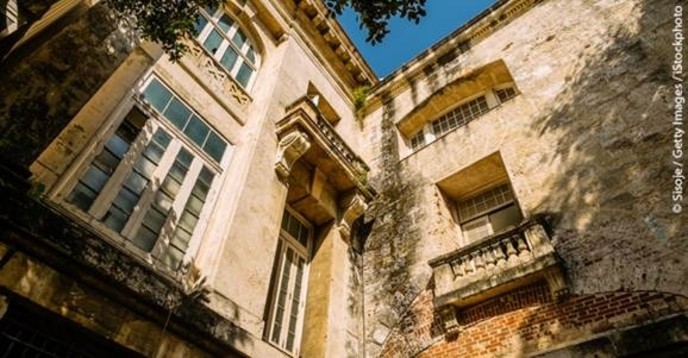 Detail of a colonial building in Old Havana, historical center of the Cuban capital.

Havana is finalizing preparations for a grand celebration of the 500th anniversary of its founding, in November 2019. Emblematic buildings in the historic centre of the Cuban capital are being restored. An exceptional renaissance has been underway for the past three decades, driven by the commitment of its inhabitants, the determination of one unyielding man, and a strong political will.

“What the heart demands, the hand performs.” This proverb, engraved in Chinese ideograms on the roof of one of the most magnificent buildings in Havana, expresses the love that its inhabitants have for their city. “A land of passage for so many years, people of the most diverse origins from Africa, Europe, China, Yucatán have met here in a kaleidoscopic amalgam that has produced our unique but varied ethnic, ethical and aesthetic identity,” wrote the Cuban author, Manuel Pereira, in his article, Enchanted seashell: a portrait of Old Havana, published in the Courier in July 1984.

That was two years after the inscription of the historic centre of the Cuban capital on  UNESCO’s World Heritage List. Old Havana comprises of more than 3,000 buildings, housing 50,000 people today.

About a decade later, in 1993, the state adopted a decree, making the city centre a priority preservation area. A Master Plan for the restoration of Old Havana was quickly drafted, overseen by the Office of the City Historian of Havana (see our interview).

The effects of climate and urban growth have taken their toll on the old quarter, which has suffered severe deterioration since the beginning of the twentieth century. Cuba has rallied together to save its city. “It is impossible to rescue 465 years of stone overnight, but Old Havana will be saved. Its splendid face will be restored and be converted, not into a lifeless museum but into a museum that is living and can be lived in,” wrote Pereira, thirty-five years ago. Time has proved him right.

Based on a self-management strategy and adopting an approach that encompasses heritage, society, education and culture, the Cuban plan has become a model for the restoration and enhancement of historical urban centres, particularly in Latin American countries. Recognized by international experts, the plan has won over twenty-five national and global awards and figures on UNESCO’s list of best practices in world heritage management.

One feature of the plan is that it involved the local population in the rehabilitation of their quarter. Over the years, more than 14,000 jobs, calling for different degrees of expertise, have been created by the Office of the City Historian for residents of the old town and nearby communities. An education system has been set up specifically to meet the needs of the plan.  It integrates the University of Havana, founded in 1728, and three specialist schools, to offer training to students aged 16 to 21. Twelve subjects are taught there, over a two-year period. To date, around 1,500 young people have been trained in vocations related to the restoration and rehabilitation of cultural heritage.

The Museum Classroom project brings primary schools and museums together to teach young children about the history of Old Havana. This is one of many ways to raise public awareness of heritage values among people of all ages. The City Historian’s office, which has established these values, also promotes them. Thousands of families have benefited from cultural tours of the city, watched Havana Walks on television or read the monthly series, Habana Nuestra (Our Havana), in  print and online.

Once subsidized by the state, the restoration of the historic centre now benefits from a system of self-financing, with the development of a local economy. Companies and tourism agencies were started to create a gastronomic, commercial and hotel network in the priority protection area, compatible with the cultural interests of the quarter. Museums, galleries and theatres have also been established in the most beautiful buildings, attracting a large number of national and foreign visitors – tourism is one of the most important sources of finance for the restoration of Old Havana.

Since the quality of life of its inhabitants is one of the main criteria of the restoration plan, a significant part of the resources it generates are used to finance social institutions. These include the Doña Leonor Pérez Cabrera maternity hospital, the Santiago Ramón y Cajal geriatric centre, which provides specialized care to around 15,000 elderly people, and the former Belén convent, which houses the Office for Humanitarian Affairs. This department focuses on the most vulnerable members of society, including victims of natural disasters, such as the frequent hurricanes. Here they have access to a pharmacy, a physiotherapy centre, an ophthalmology clinic, and also a food store, a hairdresser and a barber. Socio-cultural activities and meetings for people of all ages are organized here, including workshops on the environment, traditional medicine, and other topics of interest.

The development of squares, green areas, pedestrian streets and recreational spaces, and municipal services like street lighting, gas supply, waste collection and the cleaning of public spaces are all an integral part of this massive reconstruction plan. The most fundamental aspects – like making sure that people living in buildings under renovation are not rendered homeless – have not been neglected either. Through the plan, more than 11,000 families have so far benefited from a decent roof over their heads.

To learn more about the history of Havana, see Enchanted seashell: a portrait of Old Havana, UNESCO Courier, July 1984.