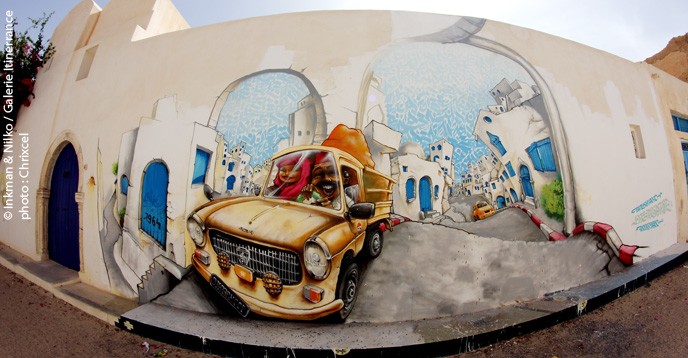 Long considered marginal, street art today represents a major trend that democratizes access to art and infuses urban spaces with a new social and economic dynamic. In the heart of the island of Djerba, Tunisia, some 100 artists have illuminated the small town of Erriadh – now known as Djerbahood – with about 250 murals. Mehdi Ben Cheikh, a French-Tunisian gallery owner who initiated this promising project, tells us how the idea continues to grow.

How was the Djerbahood project born and why did you choose Erriadh as a location for it?

In 2013, I had completed the Tour Paris 13 project, which received exceptional media coverage. This high-rise building in the 13th arrondissement of the French capital, was condemned to destruction and was demolished in April 2014. But before the deadline, about 100 artists of eighteen  nationalities volunteered to transform it into a collective work of art. Façades, common areas and thirty-six apartments were taken over by the masters of street art. These works, though ephemeral, are now available on the Web, to a huge audience around the world.

This success encouraged me to set up another project that I had been working on for some time – organizing a street-art event in Tunisia, which would make people talk about the country in positive terms. Erriadh, on the island of Djerba, seemed to me the ideal place – with its luminosity, its beautiful traditional architecture, its urban development structured around a central square, its history, the legendary hospitality of its inhabitants. Let’s not forget that if Djerba is indeed, as we believe, the land of the Lotus-Eaters of Homer's Odyssey, Ulysses was its most famous visitor!

Formerly known as Hara Essaghira, Erriadh is located near the famous Ghriba Synagogue, one of the oldest in the world. A Jewish pilgrimage site to this day, it was built by the exiles who fled Jerusalem after Nebuchadnezzar II destroyed Solomon's temple around 586 B.C. Its population was therefore mainly composed of Jews and Muslims, who lived there together, as evidenced by its five synagogues (two of which are still in operation) and its two mosques.  But following the massive departure of the Jewish population from the island in the 1960s, the small town fell into a state of lethargy – remaining at the margins of tourism, the island's main economic activity. Even though it’s only six minutes from an international airport!

Did you face any difficulties getting the project accepted locally?

I quickly obtained permission from the national authorities to start work in the public space. The country was in a period of transition after the revolution, municipal authorities had been dissolved throughout the country and replaced by provisional committees, but in Erriadh there wasn’t even a provisional committee. So the project was started with private donations. With the support of some hotel owners in Djerba, I was also able to get a financial contribution from the Ministry of Tourism.

As for the inhabitants, we had to negotiate with them at first, of course. They didn't know what we were going to do with the spaces they owned. We explained the idea, the process, and it was mainly the women who persuaded their men to let us go ahead with it. Once the first works were completed, the inhabitants began to ask us to decorate their houses.

Suddenly, Erriadh woke up. It has become a destination and a transit point for thousands of tourists (the taxi drivers were thrilled!), many restaurants and several galleries have opened, and property prices have risen sharply. The lives of the inhabitants have completely changed. That's what matters most to me.

You brought in about 100 renowned artists. What persuaded them to join the project?

The project makes sense. What interests artists is to create, and to share their work with as many people as possible. The contracts signed with them concerned only image rights. Our objective is to promote the reputation of artists and not to earn money directly through these events. And there’s something for everyone –  artists, cities, the public.

The artists represented thirty-four different nationalities and produced 250 murals! Groups of them took turns working every week, for a period of three months. They were free in their creative approach. Of course, we were all aware that we shouldn’t shock the inhabitants with images of naked bodies, for example. It was necessary to respect the population, its culture. But beyond that, they were free to do as they pleased. Each artist interacted with the space according to his or her own inspiration.

Since this experience, the artist’s place has gained more respect in Djerba. The inhabitants have understood not just the economic benefits that this art represents for them, but also the essence of the artistic approach. They met the artists, they forged close ties with them. The artist is no longer perceived as the village madman, marginal, but as someone gifted – who creates a structured imaginary universe and who, at the same time, can contribute concretely to the improvement of daily life.

Some people tend to think that street art can only succeed in a country where there’s already a cultural and artistic dynamic – in other words, in the West.  Djerbahood has proven the opposite. It shows that not everything is done elsewhere. That any place in the world can become, at some point, the capital of street art, even if it’s located at the far end of an island.

In what condition are the works that have been in Djerbahood since 2014?

Very few of them remain. The great difference in temperature between the winter and summer, the humidity, the lime smeared on the walls – all this has affected the conservation of the works.

In the new project I am launching in Paris in April 2019, we use resistant materials like marine varnish, and restoration is part of the plan in the city's specifications. It is in this spirit that I would like to perpetuate the Djerbahood project, which enters its second phase this year. My objective is to make Djerba a huge street-art lab – like Ibiza, in Spain, is the island of musical creation and electro.

How can street art be defined?

Street art is an appropriation of urban space through an artistic approach, whatever its nature. It includes as many styles and worlds as there are artists. It goes from graffiti to gestural or chromatic figuration, from sound and light installation to physical performance. Artists play with urban infrastructure, with architecture, with light and shadows. Graffiti can measure seventy centimetres or as many metres high! Regardless of the medium used, the most important thing is to take over the streets.

This kind of artistic expression has always existed – the Lascaux cave that dates back to the Palaeolithic period is proof. But street art is now booming, particularly in Latin America, the United States, Europe and the Arab world. Street artists el Seed, Shoof and KOOM – to name just a few artists of Tunisian origin – have now acquired international reputations and embody the exceptional dynamism of this art form that wants to build bridges between people.

El Seed, for example, has transformed the face of Kairouan, a Tunisian World Heritage site, and paints his calligraffiti all over the world – South Africa, Canada, South Korea, Dubai, Egypt, US, France. Hosni Hertelli, whose pseudonym Shoof means “look” in Arabic, has also resurrected traditional calligraphy in his own way – through painting on ancient Tunisian façades, but also through music and light. His show White Spirit attracted thousands of spectators in Australia and France. Musician and calligrapher Mohamed Koumenji (KOOM) combines these two arts in his plastic and luminous works, while drawing inspiration from Sufi tradition and incorporating modern technologies. An example that showcases his great talent is his multidisciplinary creation, On the Roads of Arabia, co-organized by Paris’ [founded by Cheikh] Galerie Itinerrance at the Louvre Abu Dhabi in November 2018.

Bringing art to the people rather than confining it to the places reserved for it – is that what street art is about?

Street art was not created with the intention of bringing art to the people, but in reality, that’s what it does. Because it’s practised in public spaces, it’s offered to people free of charge, at street corners. It’s the most democratic artistic movement there is, but also the most appropriate for its time – relayed on the Web through photos and videos generally taken by the artists themselves, its reputation is based on the recognition of the greatest numbers, through social media.  Once the artist is recognized, she or he can choose to exhibit in galleries, which link street art to art in places dedicated specifically to art.

Therefore, it’s a whole system parallel to contemporary art that’s being established. I have mentioned the project launched in Paris in April 2019. It’s on Boulevard Vincent Auriol, where we are creating a real museum of a new type. Everything has been thought about – the lighting with projectors using solar energy, the sound system, the durability of the works. Street art does not have to chase museums to be shown – it plays with the city, it’s created under the public’s eye, it has exchanges with the urban population, and it is accessible to everyone for free.

And anyone can become a street artist! But in the absence of gallery owners or museum curators, isn’t there a risk that this art will alter cultural heritage sites? In Kairouan, for instance, the domes have recently been painted.

We can indeed question the aesthetic value of certain works that emerge in the public space.  But we can also say that instead of white domes, some of our mausoleums now have colourful domes! Even if it’s more or less well done, I think that in a few years' time, we will end up with interesting results – street art is an art that is constantly being renewed.

There is no need to fear art.  Sometimes we want to pass off certain creations as art, when they don’t deserve the name, because they serve abominable ideologies. But these are extremely rare exceptions. Art has never been a threat to anyone, quite the contrary. I am convinced it’s the best weapon against obscurantism.

A French-Tunisian visual arts teacher, Mehdi Ben Cheikh founded the Galerie Itinerrance in Paris in 2004. He stages street-art projects involving artists from all over the world, and has published two books based on the two major projects he set up in Paris and Erriadh respectively: L'événement street art Tour Paris 13 (2013) and Djerbahood, le musée de street art à ciel ouvert (2014).