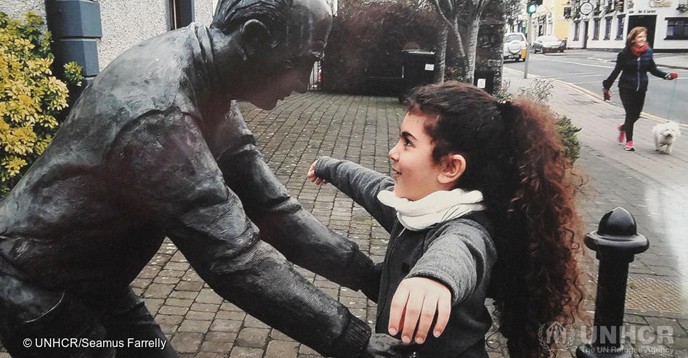 Lorca Fakir and her family were among the first Syrian refugees to benefit from a community sponsorship programme in Ireland, February 2019. The initiative involves private citizens aiding displaced people entering the community.

13 November 2015. The French capital is in the grip of a series of suicide attacks, the deadliest the country has seen in recent history – stirring up emotions all around the world. Meanwhile, far from the commotion in Paris, six cameras closely follow the daily lives of a father and his daughter in Bologna, Italy; a family in Seville, Spain; a couple in love in Riga, Latvia; a lonely young man in Hamburg, Germany; a determined teenager in Toulouse, France; a couple getting together in Loures, Portugal. Scattered all over Europe, these people have nothing in common except that they are all migrants. A group that will pay the high price for increased security and border controls in the aftermath of the Paris bombings.

Their story is told in 13.11, a six-episode TV mini-series (fiction), produced in 2017 by Elenfant Film, an Italian video and film production company. It aims to show the human face of migration, and to prompt us not to forget that every minute, twenty people are displaced from their homes in our world today.

The city of Bologna was the driving force behind this project. The city is leader of the European Coalition of Cities Against Racism (ECCAR), launched at the end of the fourth European Conference of Cities for Human Rights in 2004.

The same year, UNESCO created a vast global network of cities united around the fight against racism, discrimination, xenophobia and exclusion in urban areas. The  International Coalition of Inclusive and Sustainable Cities (ICCAR) brings together the regional coalitions created in Europe (2004), Africa (2006), Latin America and the Caribbean (2006), Asia and the Pacific (2007), Canada (2007), Arab States (2008) and North America (2013).

Mobilizing cities to adopt a culture of solidarity and cooperation takes place through a variety of channels, including regular meetings of mayors, international conferences, and publications. In May 2016, for example, UNESCO and the foundation of its Goodwill Ambassador, Marianna V. Vardinoyannis, launched the Welcoming Cities for Refugees: Promoting Inclusion and Protecting Rights initiative. Conducted in partnership with ECCAR, the initiative resulted in the 2016 publication of the same name. It provides the first thorough international mapping and analysis of city and migration issues, with a focus on Europe. The publication also reviews perspectives of international networks on cities and migration, and identifies a set of common principles, guidelines and actions to be carried out in the field of urban governance.