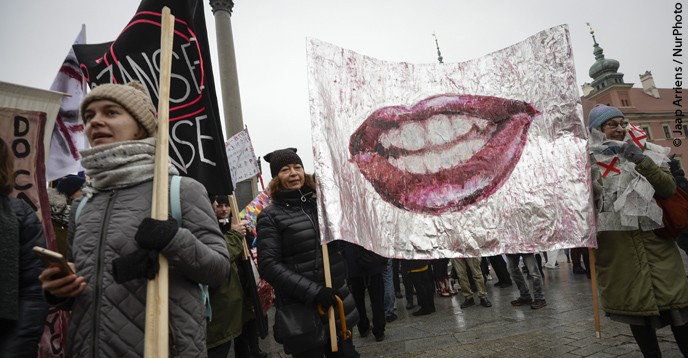 March through the old town of Warsaw in November 2018 to celebrate 100 years of women’s suffrage.

Faced with mounting conservatism, progressive civil society in Warsaw is demonstrating a strong capacity for protest in order to defend democratic values. The “rebel” Polish capital – so often occupied, mistreated and destroyed – has held firm through many episodes of its history. It is still being reconstructed, in a constant quest for fulfilment.

Warsaw is not what you would call a beautiful city. It does not offer itself in all its magnificence to the hurried visitor, as does Krakow, the former Polish capital. A city with a hundred shades of grey, it was invaded by the younger generations after the fall of the communist regime in 1989. They squatted in the abandoned factories and turned them into places of artistic creation. They defended the architecture of the communist period in the face of pressure from new real-estate developers. The Palace of Culture and Science, for example, a “gift” from Comrade Stalin, completed in 1955, still dominates the city centre today – whether its many critics like it or not. As imposing as it is unloved by the people of Warsaw, this immense building of more than 800,000 square metres was a veritable cultural multiplex before its time – housing museums, convention halls, workshops, theatres and art-house cinemas.

Over the last thirty years, a myriad of new meeting places – galleries, clubs, bars – have flourished here and there in post-communist Warsaw, which continues to attract students, executives of international companies, artists and adventurers from all over the world.

You have to walk through the city’s streets to let yourself be invaded by the energy that drives it, and let yourself be drawn into its many unexpected corners, to meet at random a group that marches here, another that parks there – when it’s not a human tide protesting, brandishing banners and signs.

Silent marches and noisy demonstrations are frequent scenes in Warsaw. White flowers, black clothes, candles, firecrackers – all these mingle under a surge of white and red flags. But while some also bear the blue flag of Europe with its golden stars, others wave the black or the green flags of the nationalist patriots, nostalgic for a “Greater Poland from sea to sea”. While some proclaim: “Let us not leave democracy to die in silence!”, others demand a “pure Poland”, a “white Poland”.

This is the national paradox, which in recent years has turned into a veritable rupture between two Polands, which defy or ignore each other. And this rupture gushes forth in the public square, both literally and figuratively.

Most often, the confrontation crystallizes in front of the presidential palace. Until April 2018, this was the arrival point of the religious procession that left the old town every tenth day  of the month to commemorate – with a mass, prayers, hymns and speeches – the Smolensk disaster of 10 April 2010. On that day, ninety-six prominent people, including President Lech Kaczynski, were killed in a plane crash. A monthly ceremony, raised to the national level, was therefore to be repeated ninety-six times, till April 2018. It occupied the historic centre of Warsaw and attracted crowds of citizens who turned up regularly to protest against what they considered to be an authoritarian and religious appropriation of the public space.

The citizens’ opposition to the nationalist trend started mobilizing in 2015, through a civic non-governmental organization, the Committee for the Defence of Democracy (KOD). On 13 December, the anniversary of the traumatic day when martial law was imposed in Poland by General Jaruzelski in 1981, tens of thousands of people march in Warsaw every year. The street demonstrations on that day in 2016 saw the largest turnout since the first free elections in 1989. The citizens of Warsaw, joined by protesters from around Poland, took this opportunity to challenge state manipulation of the constitution, institutions, and the rights of citizens, particularly women.

Women are at the forefront of all civil society movements, bringing together a large part of the society. In 2016, a draft bill to ban all abortions sparked mass nationwide strikes and protests. The proposed legislation would have drastically curtailed Poland’s already-strict abortion laws, which allow for the voluntary termination of pregnancy only in cases of severe fetal malformation, if there was grave danger to the mother's health, or if the pregnancy was a result of rape or incest. That time, the protesters won, and the government was forced to abandon the plan.

But on 11 November 2017, when women sat on the Poniatowski Bridge to block the path of nationalists marching during Poland’s Independence Day, they were forcibly removed – and then brought to justice on charges of obstructing the freedom to protest.

The same scene is repeated every Independence Day. A handful of women, brandishing “Women against Fascism” banners, are pushed around by scores of men dressed in black, uttering sexist vulgarities, alternated with xenophobic, anti-Semitic and racist slogans.

The same mob shows up outside theatres. After each performance of a controversial play that contradicts the sacred codes of “Polishness”, the Powszechny Theatre prepares to face a new riot organized by small groups of the far-right. The theatre – along with Krzysztof Warlikowski's New Theatre and some other famous theatres in the country – has always been a symbol of the struggle for the artistic freedom that remains a thorn in the side of authoritarian powers.

Could this be a coincidence? Poland’s student revolt in 1968 – a milestone in the struggle for liberation from Soviet oppression – began with the withdrawal of a classic, Adam Mickiewicz's poetic drama, Dziady (Forefathers’ Eve) from the Warsaw National Theatre’s repertoire.

From fall to reconquest, so goes the life of this amazing city that draws its ardour and energy from its human resources.

This wave of rebellion and freedom is not new in Warsaw. Does it come from its river that cannot be tamed? The Vistula, with its vast and steep valley that prevents the right and left banks from getting closer, remains impetuous and wild. Bordered by sand and bushes, it gives the city its character.

For a long time, Warsaw retained its rustic style. Its emancipation began in 1915, under the reign of the Germans, who recaptured it from Russia during the First World War. Although it was  severely exploited economically by the occupiers, the city was driven by an extraordinary determination and hope. Municipal elections were held, and the university and polytechnic opened. Warsaw was preparing to take on the role of capital of a sovereign state, which it finally attained at the end of the war, in 1918.

During the twenty short years following independence, the entire city became a construction site under Marshal Józef Piłsudski, a leader who was both adulated and controversial. The result was that in 1939, Warsaw looked like other European capitals. It had an elegant city centre and many areas inhabited by workers, who made up half its population. A large Jewish neighbourhood, teeming with life, spread over at least a third of the area, stretching from the centre to the north of the city.

It was then that the bombs of Germany's invasion struck Warsaw, until the coup de grâce in October 1944. Hitler wanted to make the city an example of total annihilation, following the failed Warsaw Uprising led by the underground Polish resistance movement from August to October 1944. The city’s right bank was almost completely destroyed, and the surviving population deported. Warsaw was nothing more than a vast field of ruins, and the possibility of its reconstruction seemed doubtful, given the magnitude of the task.

Yet, as early as in January 1945, homeless revenants were already flocking to the banks of the Vistula, to stir up the frozen rubble. They thus began, on their own initiative, a  reconstruction that would soon turn into an extraordinary achievement for the entire nation. Fortunately, architecture offices and schools had clandestinely compiled inventories of historic buildings during the Nazi occupation. All was not lost. The market square, the town houses, the circuit of the ramparts, the Royal Castle and important religious buildings of the “invincible city”, as it was called then, would rise from the ashes – driven by a unifying national impetus encouraged by communist propaganda. This led to Warsaw’s inscription on the UNESCO World Heritage List in 1980. The Archive of Warsaw Reconstruction Office (BOS Archive), which kept track of this memorable period, was added to the Memory of the World Register in 2011.

Another fascinating chapter in Warsaw's history is its ghetto. Many of us have heard about the Warsaw Ghetto Uprising in the spring of 1943 and its resistance, as determined as it was hopeless. But how many know the exact location of this huge enclosure, the largest in Nazi-occupied Europe? Built in 1940, it was erased from the map in 1943. Even the residents of Warsaw had only a vague idea of it, as the subject was taboo during the decades of communist rule. The barbed wire had disappeared, and when the city was liberated, only fragments of its eighteen-kilometre wall, several metres high, remained. It had been somewhere north of the Palace of Culture, it was said.

A new Warsaw was rising over the buried Jewish city, the memory of which would have vanished at the same time as its 400,000 or 500,000 inhabitants, if one man had not survived. His name was Hersz Wasser. He was the assistant of the historian Emanuel Ringelblum, who, with some sixty friends, worked hard to build the clandestine archives of the Warsaw ghetto they inhabited during the Second World War. Some 25,000 pages, carefully filed in metal boxes, were extracted from the rubble between 1946 and 1950. These unique documents, collected in total secrecy, were inscribed in the Memory of the World Register just after the fall of the communist regime in 1989.

Ringelblum and his team built a bridge from nothing towards the future. Defying all prohibition, they left us testimonies on the clandestine organizations, lists of deportees, chronicles, literary texts, works of art, diaries, private letters…. It was here, in the Ringelblum Archives, that we discovered the first detailed descriptions of the Chełmno and Treblinka extermination camps. Thanks to these archives, a team of contemporary researchers and writers have been able to reconstruct in detail – at least on paper – this district of the Polish capital that has disappeared.

A palimpsest city that writes its history on the pages of the past, without ever really erasing it, Warsaw is a vast mosaic that is constantly reinventing itself in time and space. More than stone and concrete, it is made up of flows of human energy and the currents that traverse through it – constructing and deconstructing its identity, made of rebellious memory and salutary oblivion.

An architect with degrees from the Polytechnic University, Warsaw, and France’s Université de Marne-la-Vallée, Joanna Lasserre (Poland) is involved in civic action in Poland and France, in parallel with her professional projects in architecture, urban planning and communication.