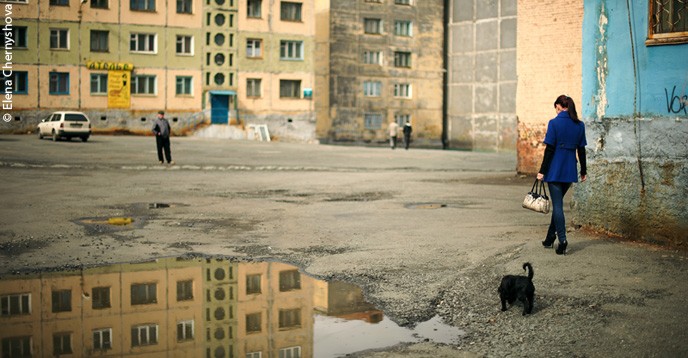 Polar climate, pollution and isolation. In her series, Days of Night – Nights of Day, Russian photographer Elena Chernyshova investigates the capacity of the inhabitants of Norilsk to adapt to extreme living conditions.

The crisis in Detroit, America’s Motor City, was splashed all over the international press  when the city filed the largest municipal bankruptcy in American history, in July 2013. The stories about the fall and then, the renaissance of this once-great city, which had staked everything on the automobile industry, abounded. But we don’t hear as much about the monogoroda, Russia’s long-forgotten industrial towns, that share a similar fate. There are 319 of these single-factory towns, where a single industry or factory accounts for most of the local economy. How are they faring?

It is 2 June 2009, and the world is in the throes of one of its most severe financial crises. In  north-west Russia, the federal highway linking Novaya Ladoga and Vologda is blocked. More than 300 residents of Pikalyovo, a small town in Leningrad oblast [a region, with St. Petersburg as its capital], have formed a roadblock. They are protesting because they have not been paid for months. The three state factories that supported the town changed hands, taken over by three private owners: BaselCement, EuroCement and PhosAgro. However, these companies, who formed a single production line, could not agree on a series of issues, including raw material prices, production volume and development prospects. To such an extent that in this small town of 21,000 inhabitants, 4,000 remained unemployed.

It was only when Russian Prime Minister Vladimir Putin intervened in person that the conflict  was resolved. On 4 June, he arrived in Pikalyovo, and brought the owners together – they eventually signed agreements to supply raw materials and drew up various long-term contracts. The money needed to resolve the financial issues (including employees’ salaries, money owed to raw material suppliers and transporters) was allocated by the Russian state-owned bank, the VTB Group, and production at the plant was resumed.

It is clear, however, that the personal intervention of a head of state cannot become a sustainable model for resolving crises. Especially since in most cases, the problems do not stem from disagreements between owners but from market exigencies. Indeed, Russia’s transition  to a market economy in the early 1990s has created a series of acute problems for monotowns.

At the top of the list is unemployment – jobless rates in these towns are twice as high as the national average in Russia. In addition, these towns were designed to accommodate the industry that supports them, rather than with the well-being of their residents in mind. Problems of pollution, and the lack of infrastructure, health and education are recurrent. To make matters worse, these towns are often situated in far-flung corners of the country, with exorbitant airfares making it impossible for people to travel. If they do finally make it on a plane, it often means  they’re leaving for good!

Around 13.2 million inhabitants – almost one in ten Russians – live and work in one of these 319 factory towns. Whatever their differences, they have one thing in common – their livelihood is entirely dependent on a single company or consortium, which employs at least a quarter of the population. They have all been formed around factories, major industrial forestry centres and the availability of raw material deposits (gold, iron, coal, oil, gas, apatite, etc.). In the case of   Pikalyovo, the town and its cement factory were built in 1935, in the vicinity of the station of the same name, where deposits of limestone and cement clay had been discovered, five years earlier.

The first Russian factory towns were built in the eighteenth century, in the wake of reforms by Tsar Peter the Great, who encouraged linen manufacturing and industrial forges. The second wave of rapid development took place in the nineteenth century, with the emergence of textile mills and the development of light industry. But most of these towns were established in the 1930s, as part of Joseph Stalin’s grandiose industrialization plans, which focused mainly on defence.

Today, there are more than 400 large enterprises in monotowns – including Russia’s largest coal producer, the Siberian Coal Energy Company (SUEK); the metal and mining companies, Severstal and Mechel; and the world leader in diamond mining, Alrosa. The number also includes state-owned enterprises, like Rostec, the industrial conglomerate, which manufactures and exports high-technology industrial products for military and civil use, and the Rosatom State Atomic Energy Corporation (ROSATOM), the nuclear energy company, among others.

There are factory towns all over Russia, but they are mainly concentrated in Siberia and the Urals region. There are twenty-four of them in Kemerovo oblast, for example, fifteen in Sverdlovsk oblast, and fourteen in the autonomous okrug [district] of Khantis-Mansis. Some of them have fewer than 1,000 inhabitants, like the mining village of Beringovsky, Russia’s easternmost town. Others have populations in the hundreds of thousands, like Togliatti, home to the country’s automobile industry, with 712,000 inhabitants, and Naberezhnye Chelny, where Kamaz heavy-duty trucks are manufactured, with a population of 517,000. Most monotowns, however – around 216 of them – have no more than 50,000 inhabitants.

The problems facing Russia’s monotowns is one of the main threats to the social and political stability of the country.

After the Pikalyovo crisis, the state government drew up a list of these towns, which experts classified into three categories – towns with the most complex socio-economic conditions ( red zone, consisting of ninety-four towns); towns at risk of deterioration of their socio-economic  situation (amber zone, with 154 towns), and towns with a stable socio-economic situation (green zone, with seventy-one towns).

In 2014, the government adopted a strategy for the development of monotowns, based mainly on the diversification of their economies, investment and the creation of new jobs. It called on Russia’s state development bank, VEB, which finances large-scale projects to develop the country’s infrastructure, industry, social activity, and technological potential. The bank was  instructed to set up financial instruments, primarily to aid red-zone factory towns to emerge from their crises. With this aim, the bank created a fund specifically for the development of monotowns.

Once the strategy was in place, teams of representatives from the monotowns received training in investment and entrepreneurship. This training was provided by a top private business school, in Skolkovo, Russia’s answer to Silicon Valley.

The state pitches in

Today, the Monocities Development Fund works with teams of entrepreneurs, municipal and regional administrators. Most of the factory towns have developed and approved development programmes that take into account their particular territorial, climatic, socio-economic and production features – these are integrated into regional strategic development plans.

The Fund also provides the regions with the money needed for the projects, implemented by local and national enterprises, in cooperation with the municipal authorities. It contributes resources and skills, monitors spending, and shares best practices. In 2016-2017, it concluded twenty-nine co-financing agreements with the regions to attract investment projects worth 14.3 billion roubles (over $217 million), for the reconstruction of infrastructure. In the long term, it is expected to invest more than 106 billion roubles (over $1.6 billion) in factory towns.

A priority programme for the “Integrated Development of Single-Industry Towns” came into force at the federal level in 2016. Aimed at creating small and medium-sized enterprises, or individual, one-person businesses, linked to new activities, the programme is expected to generate some 230,000 jobs. For Pikalyovo, for example, this would mean that more than  1,700 jobs of various kinds ‒ the production of greenhouse vegetables, sportswear,  furniture, etc. ‒ are expected to be created by 2030. The development plan also provides for an investment of 20 billion roubles ($303 million) in the town’s economy.

Another significant privilege is that areas of advanced socio-economic development have been created, where companies benefit from unprecedented tax advantages. The incentives include reductions in taxes on corporate income, property taxes and mining royalties, and also on insurance premiums. By the end of 2018, sixty-three such territories had been established in factory cities, with a total of over 200 companies registered.

The state alone cannot solve the problems of Russia’s monotowns, however. Large companies have also lent a hand. In 2017, Nornickel, a mining and smelting company, laid an internet fibre-optic cable worth 2.5 billion roubles (over $38 million) in Norilsk, a city situated  300 kilometres north of the Arctic circle. In 2018, CC Kolmar LLC, a coal-mining and processing company, undertook to develop regional tourism in Neryungri, a town in Yakutia, and co-invested in the reconstruction of the local airport.

In addition, large corporations have started to promote green industry. In 2008, Taneko, the oil and natural gas company in Nizhnekamsk, Tatarstan, invested in the development of a Single Maximum Allowable Pollutant Emission Project, an automated air pollution monitoring system which has since been regarded as something of a standard for controlling harmful emissions. In 2016, Nornickel shut down the oldest and most polluting nickel plant in Norilsk, reducing harmful emissions by thirty per cent.

In 2017, Mechel installed collectors that capture ninety-eight per cent of the dust and gas in its coal enrichment plant in Neryungri. And Kolmar has built closed-circuit enrichment plants, which recycle waste water for reuse in the production process.

The tangible results of all these measures are expected by 2025. Meanwhile, in the first half of 2019, the Fund will already be announcing the list of the eighteen towns with sustainable economies that no longer classify as monotowns. The leading candidate is Cherepovets, a former steel manufacturing centre with a population of 318,000. In 2017, a major mineral fertilizer production unit was set up here by PhosAgro. Twenty thousand individual companies have also been established here, employing one in four of the active labour force.

Russian journalist Ivan Nesterov has worked on promoting the integrated development of South Yakutia, a large investment project, between 2008 and 2018. He has also been involved in mobilizing investment for socio-economic development projects in the Far East.