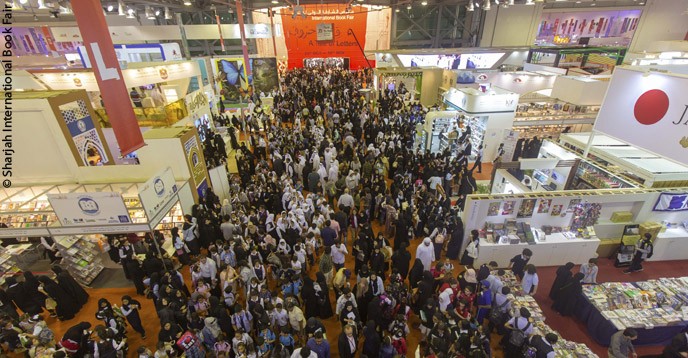 The city of Sharjah in the United Arab Emirates (UAE) became the World Book Capital for the year, starting in April 2019. It invites the public to embark on the bridge of knowledge to discover the diversity of the world’s cultures and peoples.

“The book is, in all circumstances, the best of companions.” This quote from Al-Mutanabbi, the illustrious tenth-century Arab poet, has become an adage that lovers of literature, poetry and knowledge in general, take pleasure in repeating – even today, when social networks and audio-visual media have considerably overshadowed the role of books.

The book remains a privileged medium for promoting the values of tolerance, coexistence and peace, for defending freedom of expression and fighting extremism and obscurantism ‒ all common denominators of the events that begin in Sharjah on 23 April 2019, World Book and Copyright Day, and continue for twelve months, as part of its nomination as World Book Capital 2019.

Sharjah is the first city in the Persian Gulf and the third city in the Arab world to receive this designation.

It was in Sharjah that the first school and the first library were opened in the UAE. And it is in this city that, since 1982, the annual Sharjah International Book Fair, has exhorted the public with “Read – you’re in Sharjah!”, its catchy slogan. Now the third-largest book fair in the world, it welcomed 2.7 million visitors in 2018, and 1,874 exhibitors from seventy-seven countries. It offered over 1.6 million titles and a programme of 1,800 events.

The emirate also boasts of the Sharjah Publishing City (SPC), which it describes as the world’s first free zone dedicated exclusively to serving the global publishing and printing industry. Spread over 19,000 square metres, the facility offers state-of-the-art services and infrastructure for the entire chain of book-publishing – from writing and designing, to printing and distributing books – for a range of budgets.

For its part, the Emirates Publishers Association helps to promote books and reading among all sections of society and different generations of readers. This has earned the non-profit organization the recognition of its peers – its president, Sheikha Bodour Bint Sultan Al Qasimi, was elected vice-president of the International Publishers Association in 2018.

“The book is the means by which every society can progress, surpass itself and engage in dialogue. It is a bridge between all the countries of the world,” Sheikha Bodour said, taking up her post as head of the Sharjah World Book Capital 2019 office.

In partnership with twenty representatives of the public, private and civil society sectors, the secretariat is organizing a series of cultural and artistic events throughout the year, not only in the Emirates but also in other countries in the region. The event aims to contribute to the development and support of publishing in the UAE and throughout the Arab world, by providing access to books for everyone, especially children and teenagers; introducing promising authors; increasing the readership of printed and digital books, and encouraging their translation. All genres of books are represented – poetry, fiction, non-fiction, social and scientific publications, and even comic books.

At the end of the event, Sharjah will pass on the baton to the city of Kuala Lumpur, Malaysia, which has already been designated by UNESCO as the World Book Capital, 2020.

With this article, the Courier participates in the celebration of World Book and Copyright Day, 23 April.

A writer and literary critic, Ghalia Khoja (Syria) is the author of twenty-five books, including collections of poetry, novels and essays. A journalist for the Al-Ittihad Arabic daily, she has been living in the United Arab Emirates since 2004.