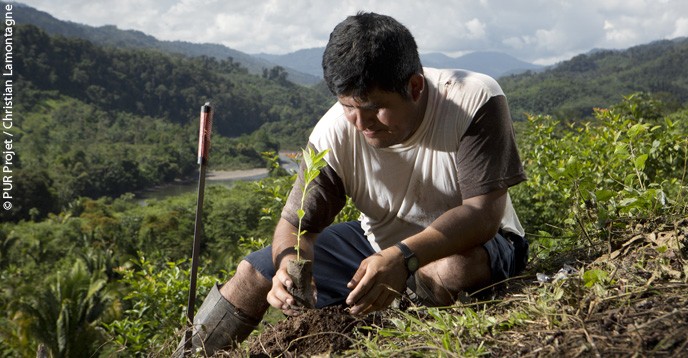 Joel Díaz plants a tree as part of the PUR Projet reforestation project in the Gran Pajatén biosphere reserve in Peru.

It was a region devastated by intensive rubber production in the nineteenth century, and  occupied by drug cartels and guerrillas – who made it a lawless zone overrun by coca plants, where the trafficking of cocaine was routine – in the 1980s. But today thousands of people live off mixed agroforestry here, planting cacao and other crops. In this area of the Central Cordillera of Peru, UNESCO designated the Gran Pajatén Biosphere Reserve in 2016. Roldán Rojas Paredes was at the heart of the project.

How would you describe the Gran Pajatén Biosphere Reserve to someone who has never heard of it?

It is an extraordinary place, characterized by a great natural and cultural diversity, because it brings together two totally different habitats – the Andes and the Amazon. Spread over some 2.5 million hectares, the reserve is home to 5,000 plant species and more than 900 animal species, about thirty of which are endemic. It also encompasses the Río Abiseo National Park, inscribed on UNESCO’s World Heritage List in 1990, which has an abundance of archaeological remains. Since the mid-1980s, thirty-six pre-Columbian sites have been discovered here, at altitudes ranging from 2,500 to 4,000 metres.

For those of us who were born here, all this constitutes a unique legacy, for which we feel responsible and which obliges us to think in the long term.

I see this reserve as our geographical fortress, offering us ideal conditions for a better quality of life and providing great opportunities for future generations.

Personally, I have always been attached to working on the land, to our primary forests, to their impressive greenery and the direct energy you receive from them when you live here. My life has always been intimately linked to the cultural richness, legends, imagination, music and gastronomy of this place. This is why I left to study in Lima, the capital, with every intention of returning to devote myself  to promoting this exceptional heritage. Which is what I have done.

What does the designation of Gran Pajatén as a UNESCO biosphere reserve mean for the region’s 170,000 inhabitants?

The local population has suffered greatly in the past, plagued by rubber and drug cartels, and even guerrillas. But in the early 2000s, the revival of cacao farming enabled thousands of people to escape poverty and exclusion. Over time, we have developed mixed agroforestry, which is particularly well adapted to the production of cocoa, because cacao trees flourish in the shade of other trees.

The inscription of our region in UNESCO’s World Network of Biosphere Reserves (WNBR) in 2016 gave us a tremendous boost. We saw it as a sign of recognition of the efforts we have put into becoming the leading organic cocoa-producing region in Peru.

This international recognition has opened up new opportunities for the Amazonia Viva Foundation (FUNDAVI), which works to conserve the Gran Pajatén ecosystem. Now, companies that were once sceptical and snubbed us are taking an interest in us. Poderosa, the precious metal mining company, for example, is investing in archaeological research (it has just published an excellent handbook), agricultural research (it has launched a study on potatoes) and has provided us with teaching materials for primary schools.

We are also receiving offers from new foreign investors, such as Chanel, the French fashion house,  which has signed a collaboration agreement with our Biocorridor Martín Sagrado REDD + project, for reducing greenhouse gas emissions.

Could you tell us more about that project?

It provides for the conservation and development of 300,000 hectares of primary forests managed by local communities in the Alto Huayabamba, which is adjacent to the Abiseo National Park. Launched in 2010 for a period of eighty years, it is funded by PUR Projet, the French social business enterprise, and the Jubilación Segura (secure retirement) project. The latter is a forty-year project which implements agroforestry models designed to create a new sustainable rural economy, through a reforestation and carbon sequestration plan that helps revalue the land, to break the cycle of poverty for farmers who do not have a retirement pension.

What are the next steps planned by FUNDAVI?

We are beginning to share experiences between the different members within our biosphere reserve, such as the creation of botanical gardens or beekeeping farms. We also intend to forge alliances with other biosphere reserves in Peru and elsewhere in the world.

We are not interested in competition. We want to combine strategies, to present and improve our activities, and to become a source of inspiration for all – in terms of the excellence of our work and teaching.

We are also keen to involve more universities, companies, civil society, the State and to strive for more international cooperation, to take advantage of this fabulous “brand” of biosphere reserve – to ensure that the farmer, who toils on his plot of land day after day, feels connected to the whole world.

With this interview, the Courier participates in the celebration of the International Day for Biological Diversity, 22 May.

Born in Tarapoto, 136 kilometres from Juanjuí, the capital of Mariscal Cáceres province in north-west Peru, Roldán Rojas Paredes was the driving force behind the creation of the Gran Pajatén Biosphere Reserve. He is currently Executive Director of the Amazonia Viva Foundation (FUNDAVI), which works to conserve the reserve’s ecosystem, and was a member of the first management committee of the Río Abiseo National Park in 2001.