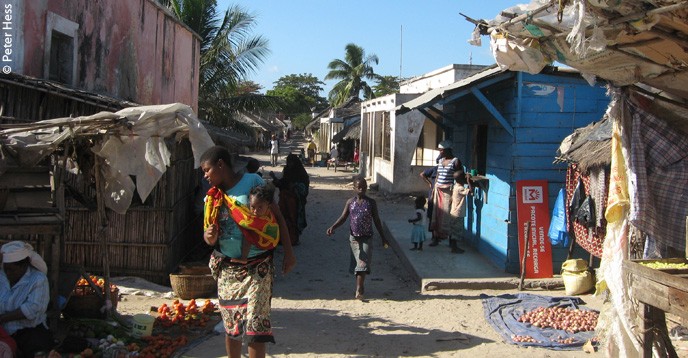 Beyond the decay of its built heritage, the town of Macuti faces the challenges of overpopulation and poverty.

Ilha de Moçambique, which gives the country its name, is a crescent-shaped coral island four kilometres from the coast of the northern Mozambique mainland, at the entrance to the Indian Ocean’s Mossuril Bay.

Barely three kilometres long and 200 to 500 metres wide, with an urban area of about one square kilometre, this little slice of paradise is a cultural melting pot of Bantu, Swahili, Arab, Persian, Indian and European influences. The island’s rich architecture reflects its dramatic and colourful history. Inhabited by Bantu speakers in the year 200 and recorded on navigation routes of the Indian Ocean since the first millennium, the Island of Mozambique was dominated by Arabian trading between the eighth and sixteenth centuries. Then, for four centuries (1507 to 1898), this fortified town was the capital and trading post of Portuguese East Africa, at the centre of Portuguese maritime routes between Western Europe and the Indian subcontinent, and later, Asia.

The island’s incredible architectural unity is derived from the consistent use – since the sixteenth century − of the same building techniques with the same materials and decorative principles.  Recognizing its international historic importance, its exceptional urban fabric, fortifications and other examples of architecture, the Island of Mozambique was inscribed on UNESCO’s World Heritage List in 1991.

Two different types of dwellings and urban systems co-exist here – the city of stone and lime, and the city with palm leaf roofs.

The Stone Town, with its houses made of limestone and wood, has Swahili roots, with Arab and Portuguese influences, and dominates the island’s northern half. It is a living museum, with religious, administrative, commercial and military buildings testifying to its role as the first seat of Portuguese colonial government. Occupying two-thirds of the island, it is inhabited by a relatively small part of the population.

The city of Macuti, named after the original palm leaf roofing (macuti) of the houses, hosts many variations of the vernacular Swahili architecture, and lies to the south. Organized into seven bairros or districts, which are the densest settlements on the island, it is not surprising that Macuti suffers from an acute water shortage, a lack of sanitation and a serious threat of seasonal flooding.

The island’s outstanding universal value has borne the brunt of multi-faceted threats, such as uncontrolled development and the impacts of a globalized culture. A lack of financial resources, inadequate infrastructure, a low awareness of conservation among the local population and a weak institutional capacity for conservation management have all contributed to the degradation and poor upkeep of the island’s built heritage. For example, an evaluation of the condition of the buildings in the Stone Town has shown that they have deteriorated by fifteen per cent between 1983 and 2012.

This has prompted UNESCO-driven initiatives on the island to focus on two major areas: the condition of life and habitation in the bairros of Macuti and the general degradation of the built heritage of the Stone Town.

Following the adoption of the UNESCO Recommendation on the Historic Urban Landscape (HUL) in 2011, it was decided to apply the HUL approach to the island. As part of the UNESCO World Heritage Cities Programme, HUL provides technical assistance and helps World Heritage cities across the globe to better reconcile urban heritage conservation into strategies of socio-economic development. These new strategies have helped strengthen the governance mechanism for the sustainable management and development of the Island of Mozambique.

The HUL guidebook: managing heritage in dynamic and constantly changing urban environments; a practical guide to UNESCO's Recommendation on the Historic Urban Landscape.